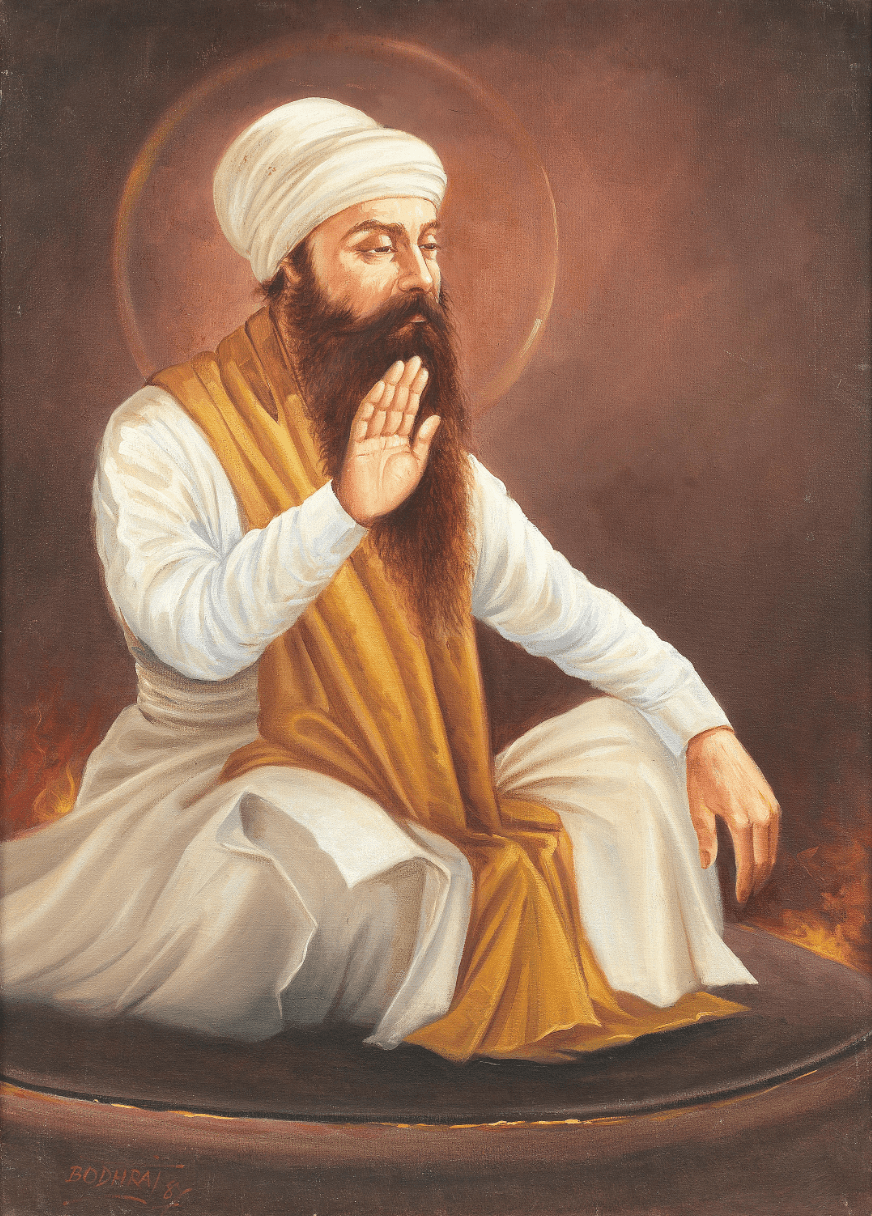 Whoever meditates on Guru Arjun Dev, shall not have to pass through the painful womb of reincarnation ever again. ||6||

Guru Amar Das Ji had a special affection for Arjan Dev Ji and they spent 11 years together. One day, while Guru Amar Das Ji was resting, young Arjan Dev Ji went and started shaking the cot. When Guru Ji’s daughter, Bibi Bhani Ji came rushing to apologize for the disturbance, Guru Ji was unconcerned and instead said to her “Dohita bani ka bohita” or “my grandson will spread the wisdom of Gurbani.”

Guru Amar Das Ji taught Arjan Dev Ji the Gurmukhi script and Baba Buddha Ji taught him more about Sikhi. He also learned math, Hindi, Persian and Sanskrit as well as horse-riding and archery. From a young age, Arjan Dev Ji had a love for Gurbani. He did a lot of Kirtan on the Sarangi, a traditional Indian instrument, and was well-informed about Raags.

The poet Kalshar, who has contributed 54 Swaiyas to Sri Guru Granth Sahib, says:

With intuitive peace and poise, I contemplate the Glorious Virtues of Guru Arjun [...]. From birth, He realized God through the Guru's Teachings [...]. The Word of the Guru's Shabad has been revealed, and the Lord dwells on His tongue [...].

When Arjan Dev Ji was 11-years-old his grandfather Guru Amar Das Ji passed on the guruship to his father Guru Ram Das Ji.

Guru Ram Das Ji’s cousin Sihari Mal came to invite Guru Ji to Lahore for his son’s marriage. However, since Guru Ram Das Ji was busy with the construction of Amritsar, Guru Ji decided to send one of His sons.

Guru Ji first asked Their eldest son, Prithi Chand, who was desperate to earn the Guruship from his father. Prithi Chand could sense that his father’s Jyoti Jot (passing away) was near and he didn’t want to risk being away and losing his opportunity at the Guruship.

Sri Arjan Dev Ji immediately accepted his father’s request to go to Lahore. He was told to stay in Lahore until Guru Ji specifically sent for him. Sri Arjan Dev Ji waited for several months to hear back from his father, but did not.

Once Arjan Dev Ji returned from Lahore, Guru Ram Das Ji decided to pass the Gurgaddi (Guruship) on to him. Prithi Chand had too much ego and desire, while Baba Mahadev Ji was too detached. On Bhadron Sudhi 2, 1638 BK (September  18, 1581 AD), Guru Arjan Dev Ji was appointed as the 5th leader of the Sikhs. Guru Arjan Dev Ji had the perfect balance of Naam (remembering Vaheguru), Seva (selflessly serving) and engaging with Sangat and community.

Now the Guruship entered the house of Arjan (Dev) who, to say was the son, but, he proved through his good deeds to be worthy of the Guru-seat.

Guru Ram Das Ji gave Guru Arjan Dev Ji a Pothi (book of hymns) which contained the Shabads of the previous Gurus as well as Bhagats.

Prithi Chand was enraged about not getting the Guruship. He went rogue and declared himself as the fifth Guru. He sent messengers across India to share this announcement. The Sikhs got confused and started giving Prithi Chand all their offerings.  Guru Arjan Dev Ji never got angry with Prithi Chand. Instead, despite not having any contributions from the Sangat, Guru Arjan Dev Ji still managed to continue running the Langar (community kitchen).

Bhai Gurdas Ji was infuriated to see the poor quality of life of Guru Arjan Dev Ji. Working with Baba Buddha Ji, he sent out Sikhs to inform everyone of the truth. Soon, the Sikhs all returned to Guru Arjan Dev Ji.

Guru Arjan Dev Ji was married to Mata Ganga Ji on 22nd Harh 1646 BK (July 5, 1589 AD), at the age of 26-years-old. They were married in the village Mao Sahib at Filaur, which is now famous for being the location of their wedding. Every year, the village continues to host a three day fair to celebrate.

Guru Arjan Dev Ji and Mata Ganga Ji struggled to have a child for some time. This excited Prithi Chand because he believed that he could take over the Guruship after Guru Arjan Dev Ji.

Baba Buddha Ji took the onion and smashed it in half with his hand. He told Mata Ganga Ji that such a son would be born in her house that would crush evil the way Baba Buddha Ji crushed the onion.

Guru Arjan Dev Ji chose a Muslim, Hazrat Mian Mir of Lahore, to lay the foundation store of Harmandir Sahib. In choosing a non-Sikh, Guru Sahib gave a message of religious tolerance and respect for everyone. Harmandir Sahib has four doors, one in each direction: North, South, East, West. This represents that people from any direction and socioeconomic background can enter the Gurdwara.

Prithi Chand had started selling compilations of ballads he had written. These were not in line with the Sikhi philosophy and were confusing the Sikhs.

Upon this Plate, three things have been placed: Truth, Contentment and Contemplation. The Ambrosial Nectar of the Naam, the Name of our Lord and Master, has been placed upon it as well; it is the Support of all.

He organized it by Raag. Guru Ji asked Bhai Gurdas Ji, the son of Guru Amar Das Ji’s brother and a leading Sikh scholar, to be the scribe. It is estimated to have taken 18 months for Bhai Gurdas Ji to finish this task.

The Adi Granth was finished on July 31st, 1604. It was enthroned in Harmandir Sahib, where Baba Buddha Ji was the first Granthi. As Granthi, he was responsible for reading and interpreting the Adi Granth.

Clash with Jahangir and Shaheedi

In 1605, Akbar’s son Jahangir took over the throne. While Akbar himself was tolerant towards other religions, Jahangir was not. He, along with Muslim Qazis (priests), were unhappy to see Sikhi’s growing popularity since they wanted to convert more people to Islam.

Guru Ji’s enemies decided to spread false rumors about how Guru Ji was helping Jahangir’s son Khusaru, who Jahangir wanted to punish for revolting against him. This, combined with Jahangir’s already brewing hatred for Guru Sahib and Sikhi, incited Jahangir to arrest Guru Ji. On May 20, 1606 AD, Guru Ji was arrested and sentenced to death.

Guru Ji was brought to Lahore. Chandu, an upper-caste Hindu who disliked Guru Ji, began to torture Guru Sahib. They kept their activities secret because the public loved Guru Ji.

On the first day, Guru Ji received no food or water. Guru Ji was not allowed to sleep. On the second day, Chandu made Guru Ji sit in a copper vessel full of water. He lit a fire and the boiling water burned Guru Ji’s skin. On the third day Chandu escalated things. Guru Ji was forced to sit on the Tati Tavi (burning iron plate). People poured burning sand on Their head and body. Despite this, Guru Ji remained calm and continued to recite Naam and Shabads.

While being tortured, Guru Sahib revealed and spoke this Shabad:

On the fifth day, Guru Ji asked to be taken for a bath in the Ravi river. Chandu allowed this, thinking that Guru Ji’s body, which was full of burns and blisters, would go through extreme pain in cold water. Guru Ji’s body was never recovered after Their bath in the river. Their Jyoti Jot (passing away) occurred on Jeth Sudhi 4, 1663 BK (May 25, 1606 AD). Today, Gurdwara Dera Sahib marks the location of this Shaheedi (martyrdom).

Guru Arjan Dev Ji set a new precedent in Sikhi. Guru Ji was the first Shaheed (martyr). The first person to completely submit Their body to Vaheguru and Hukam. Guru Ji set the stage for the many great Shaheedis (martyrdoms) to come.