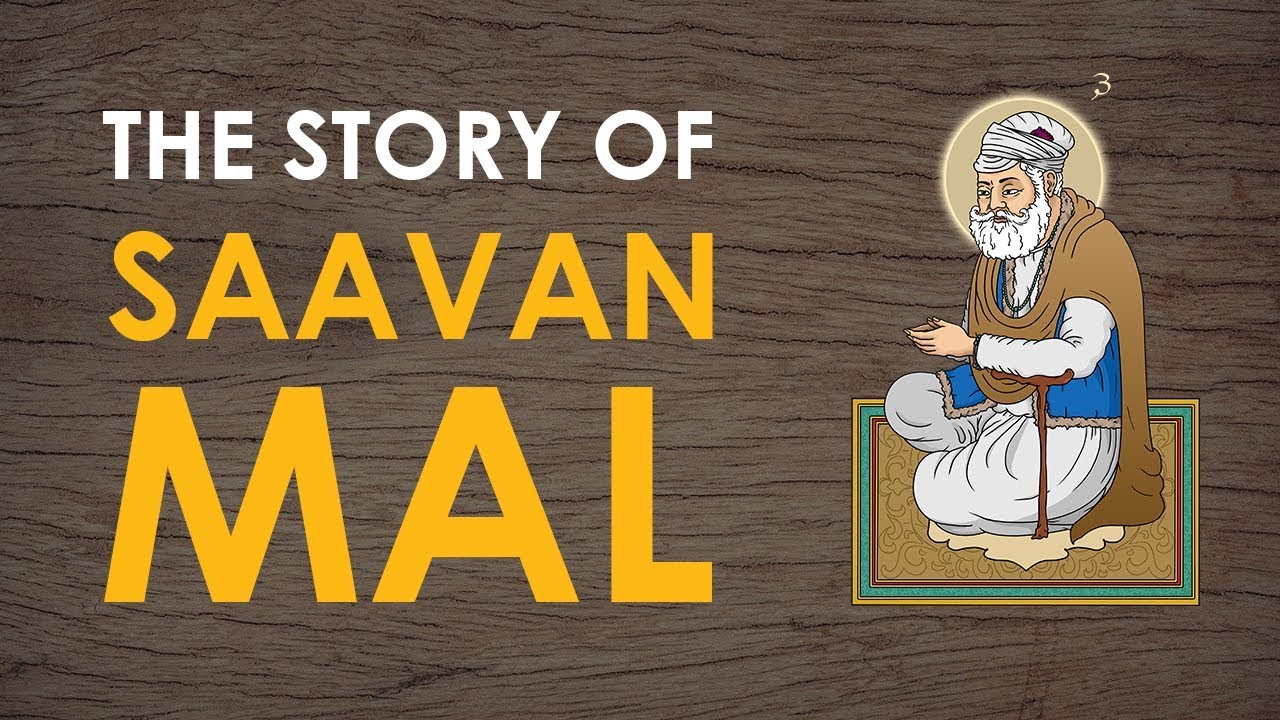 ometimes, we act out of selfishness and forget that there is a force beyond us. We forget that our Guru Ji is powerful and we get entangled by hearing our praises. This article discusses the story of a devoted Gursikh at the time of Guru Amardas Ji who goes through a similar situation.

Goes to The Other City

Saavan Mal is about to go, and the mother of Saavan Mal comes up to Guru Amar Das Ji and says, ‘O Sache Paatshah (true king), I have full faith in you but being a mother, I have a little bit of fear. The place where you're sending him is very hostile. Some people do lots of black magic. Some people curse others. I don't want my son to be affected by any of these things. Guru Amar Das Ji says, ‘Do not have fear. If he lives in the Hukam (divine law) and Bhae (loving fear) of Akaal Purakh (timeless being/God), he does not have to worry about anything.’ Guru Ji gives their Rumaal (handkerchief) to Saavan Mal and says, ‘Hold on to this tight and never stop believing in the Hukam of Akaal Purakh. Also, never let go of the Bhae (loving fear) of Akaal Purakh.’

Saavan Mal takes the Rumaal and goes to the other city. The king of that city had announced that everybody has to keep a Varat (fast) until the sun sets. But he being a Gursikh makes Parshaadaa (food) in the evening and serves it to poor people that were starving. He also eats Parshaadaa himself. The king finds out that someone fed people and ate it himself before the sunset despite his order. Then the king orders to bring Saavan Mal to him, to be punished.

Saavan Mal is brought in front of the king and is told that he made a big mistake. Therefore, he is thrown into jail. At the time when he is thrown into jail, the king's son eats something after the Varat, which makes him ill. It made him so ill that it seemed like he was about to pass away. The king had no other son and he was the only heir to the throne. The entire kingdom’s hopes were on that King. Everybody in the city was in a state of bliss because they were celebrating Ekadashi (festival). But now everybody has gone quiet and is in a state of sorrow because it seems like the prince is about to pass away.

Saavan Mal feels this while sitting in jail. He asks, why is everybody in a state of sorrow now? Guards tell him that because the king's son is ill, therefore everybody is in a state of sorrow. He says that my Guru is the giver of life, my Guru can take away all sorrow. I have this much faith in my Guru. They say, then why don't we take you to the king?. The king calls Saavan Mal out and brings him to his son and says, why don't you ask your Guru? Why aren't you able to do your Ardaas to your Guru? Saavan Mal reads Sri Japji Sahib Ji (Sikh prayer recited daily) with full love and devotion. Then he stands up and performs Ardaas (humble request). He says, Sache Paatshah, this son of yours is going through an illness, you are the one that gives life. You are the one that takes away life. Why don't you lift all of the sorrow of this kingdom? Why don't you give life? Why don't you take away the illness? We read Japji Sahib into his ears. Gurbani takes away all sorrow.

Saavan Mal takes the handkerchief of Guru Amar Das Ji, wipes it on the eyes and the forehead of the prince and asks Sache Paatshah (Guru Ji) to please bless the prince. Everybody is doing this Ardaas with such bliss, that the son of the King opens his eyes and he begins breathing again. Everybody falls at the feet of Saavan Mal. This is where the problem happens even though Saavan Mal thinks in his mind that this is all Guru Ji’s work.

Everybody, even the king, is holding onto his feet. They think he brought happiness back into the kingdom. The king says the happiness has now come back into the kingdom because of you. Saavan Mal ends up staying in that city because of all of this happiness. He forgets to go back to Goindwal Sahib. While staying there he becomes the main spiritual person. Everybody starts saying that he is the one with all the powers. He also starts believing that he is the one that brought back life to the prince. He forgets that it was the Shakti (power) of Akaal Purakh that is working through all aspects of life. He started thinking that he had the power and became the Guru himself.

Eventually, his words and Ardaas stop manifesting. Any Ardaas that he would do, would not become true. People start to say to him that you are not in control of anything. When you first came, whatever you would say, would happen and now whatever you say, the opposite happens. He realizes that all my Avgunns (demerits) and faults are gonna come out in front of the world and people are going to blame me. He goes back to Goindwal Sahib and falls at Guru Amar Das Ji's feet. He says, Sache Paatshah, I've forgotten, I've separated myself from you for such a long time. Please bless me. Guru Amar Das Ji says, never forget that Akaal Purakh is the one that is doing everything. Any Shakti (power) that you have, it is not because of you. Akaal Purakh and the Guru works through you. The darkest place that you can be is thinking that you are equal and as powerful as Akaal Purakh.

This article is a transcribed version of the video below.