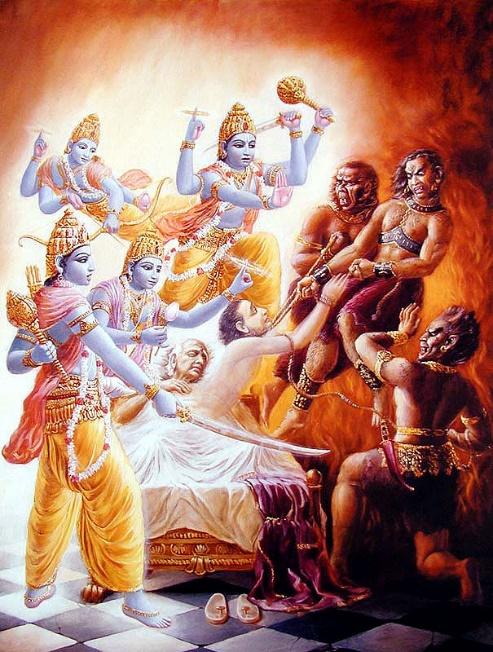 Ajaamal uttered the Lord's Name once and was saved.

Ajaamal was the son of a high caste Brahmin. His father was a priest as well as a minister of the King. He was a wise man, and many used to praise him. When Ajaamal was five years old, his parents sent him to study. The teacher who was teaching Ajaamal was also a sensible man. When a teacher gets a student worthy of the knowledge, the teacher becomes thrilled to impart the knowledge upon the student. Ajaamal could memorize all that his teacher taught. He had a sweet voice, and whenever he used to read a mantra or a Salok (stanza), it would create such an environment of peace and love.

Ajaamal Receives a Hukam (Order) From His Teacher

Within ten years, Ajaamal was able to cover 20 years’ worth of education. Many scholars heard about this, and they would come to meet Ajaamal. One day, his teacher said to him, “Ajaamal, you are still a student.” He replied, “Yes, Gurudev, but how long will I remain a student?” His teacher said, “Another four years. We have to complete the four Vedas and Upanishads (Hindu Scriptures).” Ajaamal said, “Whatever your Hukam (Order), Gurudev.” At this point, his teacher looked at him and said, “Ajaamal, whenever you come to me to study or whenever you go home, I want you to travel around the town and not go from within. Do not enter the town, as you are still wearing the garb of a student. Listen to my advice, and you shall not suffer.”

Obeying the Order of His Will, he becomes acceptable, and then, he obtains the Mansion of the Lord's Presence.

Those who follow the Hukam of their Guru will always remain in peace, as the Guru has all the knowledge of all our karma. Ajaamal asked, “Oh, Gurudev, can I ask why you have instructed me to do so?” Listening to his question, his Guru told him just to follow his instructions and not to ask more questions. Ajaamal followed his Guru’s instructions. He would travel around the town and not through it. He would not speak to anyone. Few years went by this way until Ajaamal was 20 years old. At this point, he was very close to completing his studies and becoming free.

One day Ajaamal thought, “I should walk through the town today and see why my Guru forbids me from walking through the town.” His mind thought this, but his heart told him not to go against his Guru’s hukam. In the end, his mind won. His Guru forbade him from going through the town because the town provided everything that would lure a man’s mind to do sinful acts. The power of Maya was extreme in the town.

The love of Maya is enticing; without teeth, it has eaten up the world.

The town had a brothel where the prostitutes would sit on the balcony and call out for the young men walking through the streets. Due to this, his Guru forbade him to walk through the town. A student is also like a child to a Guru; hence, caring for the student is also a Guru’s responsibility. After class, the Guru reminded Ajaamal to go around the town and not through it. Ajaamal paid no heed to these instructions and walked through the town. He was fascinated by the colors, the people, and the sounds in the city. Ajaamal was fascinated by the beautiful girls talking to men, adorned with jewelry and clothing that revealed their skin. Upon reaching home, his mind would not concentrate on his studies, it kept going back to what he saw in the town. He could not sleep at night as he kept thinking and dreaming of what he saw.

In the morning, he went to his Guru, who saw his eyes and asked, “Ajaamal, did you not sleep? Your eyes are red.” Ajaamal responded, “I did Gurudev.” His Guru asked, “Did you follow my instructions of not going through town?” Ajaamal had already committed the sin of not following his Guru’s instructions, and now he committed a second sin of lying to his Guru. He said, “Yes, Gurudev, as you said.” That day, he couldn’t concentrate in class. His mind was not at peace. The class ended, and again he went through town and entangled himself with the town’s scenery. This went on for 10-12 days. One day, he was in town, and a young girl of around 17 years old grabbed his wrist and lured him to the brothel. They indulged in a sinful act. He stayed there for some time before going home.

This went on for some time. His Guru, knowing everything, still wanted to confirm things with his own eyes. One day, he followed Ajaamal on the way back to his home.  He saw with his own eyes the actions of his student. The Guru went home and the next day, he told Ajaamal, “You do not have to come back anymore. Your education is complete.” Ajaamal was happy, and he went home. His Guru called Ajaamal’s father and told him to get his son married. Ajaamal was soon married to a virtuous woman. Even after his marriage, he kept going to the prostitute in town. Soon enough, his family and wife found out. She was very upset, but nothing could stop him from sinning. After some time, Ajaamal’s father passed away. Ajaamal took his father’s position to become the Royal Priest to the King. He had a lot of responsibilities. Up until this point, he had committed five cardinal sins,

Even after becoming a Royal Priest, he couldn’t stop going to the prostitute. He fell in love with a prostitute named Kalavanti. The news spread all around town, it reached the King’s ears that a Royal Priest is committing sins and destroying the name of all the Brahmins. Soon enough, the King called Ajaamal and asked him to explain himself. Ajaamal said, “I know it is wrong, but I am helpless. I cannot leave Kalavanti, I am in love with her.” Ajaamal lost all shame and respect for himself. One who loses shame and respect for himself has no remorse and does not care about good or bad. The King said, “Look, Ajaamal, you can no longer be the Royal Priest. You are banished from the state along with Kalavanti. All the wealth of your family will go to your wife and her child. You will not be given anything.”

Ajaamal agreed, both he and Kalavanti left the town and went to the slums to stay with other untouchables. They became very poor and no one would help them. Ajaamal would hunt for small animals in the jungle, bring them home, and Kalavanti would cook the meat. For many years they survived this way.

After many years, Kalavanti gave birth to 7 children in total. Both of them became physically weak and no longer youthful as they used to be. When the 7th child was born, Ajaamal and Kalavanti named the child Narayan (A Name for God).

Bhai Gurdas Ji say in their Vaaran (Ballads written by Bhai Gurdas Ji, known to be the key to unlocking the wisdom of Sri Guru Granth Sahib Ji),

Ajamil, the fallen sinner lived with a prostitute.

He became an apostate. He was entangled in the cobweb of evil deeds.

His life was wasted in futile deeds and was tossed and thrown within the terrifying worldly ocean.

While with the prostitute, he became the father of six sons. As a result of her bad deeds they all became dangerous robbers.

A seventh son was born and he began to consider a name for the child.

He visited the Guru who named his son Narayan (a name for God).

After the birth of the seventh son, both Kalavanti and Ajaamal started having regrets in their minds about their past actions. Kalavanti wanted to seek forgiveness and was wondering how she could repent. She would see Sadhus (Holy men) passing by her hut and hoped that they would come to save her and her family. One day, two sadhus came to Ajaamal’s hut, asking for shelter and food. Kalavanti was very happy, but she was also sad because she had nothing to offer them. The Sadhus were vegetarian, and all Ajaamal and the family would eat was meat. She spoke to Ajaamal and then agreed not to cook meat that day. They served rock sugar and boiled nuts to the Sadhus. Kalavanti pleaded, “Oh Sadhus, we only have this much to offer. We are poor and sinners. Please pray for us that God may forgive our sins.”

The Sadhus told them both, “We have seen your past and what you have done. Your seventh child is given the name Narayan. This is a sign from God. Call for Narayan all the time. One day, Narayan will surely listen to your calling.” The sadhus left, and Ajaamal started spending more time with Narayan. He would call out his name, “Come and eat, Narayan. Drink some milk, Narayan.” A time came when Ajaamal fell sick, he knew his time was coming. Bhai Gurdas Ji continues in their Vaaran,

At the end of his life, seeing the messengers of death Ajamil cried for Narayan.

The name of God made the death messengers take to their heels. Ajamil went to heaven and did not suffer the beatings from the club of the messengers of death.

Utterance of Name of the Lord dispels all sorrow.

At the very last moment, one who thinks of the Lord, and dies in such thoughts,

Says Trilochan, that man shall be liberated; the Lord shall abide in his heart. ||5||2||