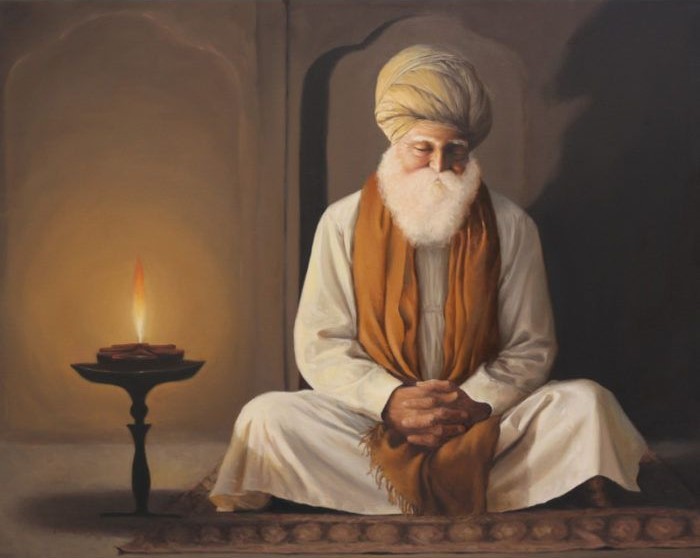 aba Buddha Ji was a Sikh of Guru Nanak Dev Ji and became the first Granthi of Harmandir Sahib Ji. In this article, we will look at their life and the Seva (selfless service) that they did of the first six Guru Sahibs in 104 years of their life.

How They Got Their Name

Baba Buddha Ji was born on 6th October 1506 to Bhai Suggha and Mai Gauran who were Jatts. Their birth name was Bura Sandhu. When Bura Ji was a young boy, Guru Nanak Dev Ji visited his village to do Parchaar (spread the message of Vaheguru). According to the book Sikhaan Di Bhagat Mala, by Bhai Mani Singh, who was a leading Sikh scholar at the time of Guru Gobind Singh Ji, Bura Ji was grazing cattle when he saw Guru Nanak Dev Ji. Bura Ji offered Guru Ji milk and did Ardaas (humble request) to be removed from the cycle of birth and death.

Bura Ji told Guru Ji about how Mughal soldiers came and ransacked their family’s fields, taking all the crops, regardless of whether it was ripe or not. At that moment, a young Bura Ji had realized that just as no villager could stop the Mughals from taking their crops, nobody could stop death. Guru Nanak Dev Ji was amazed by Bura Ji’s maturity. Guru Ji reflected Bura Ji’s wisdom by renaming him Bhai Buddha Ji, which means “old man.” Later, when Bhai Buddha Ji advanced and reached the highest states of Sikhi and became known as Baba Buddha Ji.

Baba Buddha Ji became a dedicated Sevak (selfless server) of Guru Nanak Dev Ji. After getting married in Batala, Bhai Buddha Ji continued to remain focused on Vaheguru and Guru Ji. He started spending more time in Kartarpur Sahib with Guru Nanak Dev Ji. Guru Ji built a strong connection with Bhai Buddha Ji and Guru Ji gave them the honor to apply the ceremonial tilak to pass on the Gurgaddi (guruship) to Guru Angad Dev Ji. Baba Buddha Ji continued to apply the ceremonial tilak in the Gurgaddi ceremonies of the next four Gurus until Guru Hargobind Sahib Ji. Baba Buddha Ji dedicated himself to Seva of all the Gurus he interacted with. He learned Guru Angad Dev Ji’s Gurmukhi script and took on the Seva of teaching it to others. He helped Guru Amar Das Ji with the construction of Baoli Sahib at Goindwal, the first Sarovar. At the time of Guru Ram Das Ji and Guru Arjan Dev Ji, Baba Buddha Ji helped to look over the Seva of digging the Amrit Sarovar of Amritsar. The tree which he used to sit under while supervising the excavation of the Amrit Sarovar is still on the premises of Harmandir Sahib, Amritsar. It is called Ber Baba Buddha Sahib.

Baba Buddha Ji took the onion and smashed it in half with his hand. He told Mata Ganga Ji that such a son would be born in her house that would crush evil the way Baba Buddha Ji crushed the onion. Guru Hargobind Sahib Ji, Guru Arjan Dev Ji’s only child, was born on June 19, 1590.