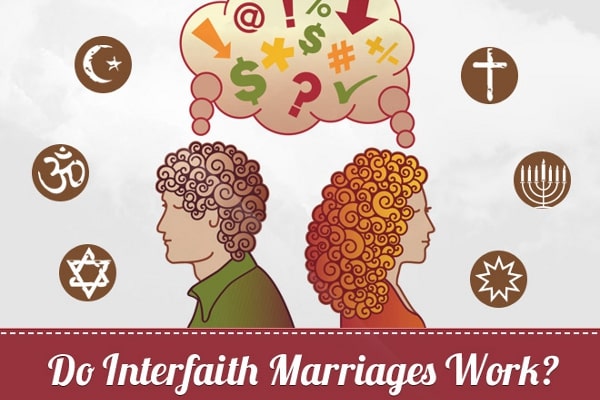 Firstly, a Sikh can have an interfaith marriage by the law. However, a Sikh can't have an interfaith marriage in the Gurdwara going around Guru Granth Sahib Ji. The Anand Karaj  (blissful union) ceremony is only for Sikhs. The reason is that in the Anand Karaj ceremony when Paath (recitation of Gurbani) is read, you bow down to accept it. The whole Paath is about the Guru. The person bowing down who's not a Sikh is saying I bow down to these words, but I'm not going to follow them. That person is bowing down to what they don't accept which doesn't make sense.

Imagine that you go to a mosque, and you say "I want to get married to this person doing a Nikah ceremony." Nikah is the Islamic Matrimony Contract between two people. They ask you "are you a Muslim?"  You say "no". They ask "do you want to take the Shahada?" Shahada is the Islamic Testimony of declaring belief in the Oneness of God and acceptance of the Prophet Muhammad as God’s Prophet. You say "no problem" and you say the Shahada: "I believe in one God and that Muhammad is the last messenger.” After this, you say "But I am not a Muslim." You just did the ceremony but you are not a Muslim.

Similarly, they are bowing down to Guru Granth Sahib Ji, accepting it as a Guru, they're going around Guru Granth Sahib Ji and saying you are the focus of my life but they're not following Guru. It doesn't make any sense. So, for a Sikh, the Anand Karaj ceremony is a relationship with the Guru. You're committing your life to following the Guru's principles. You're going around the Guru. You're saying "you are the focus of my life and it revolves around you. I revolve around you." Just like the planets revolve around the sun, a Sikh revolves around the Guru. The following Gurbani quote is proof of this where Guru Sahib Ji says,

Just as the mortal dies without water, so does the Sikh die without the Guru. ||15||

Just as the earth looks beautiful when the rain falls, so does the Sikh blossom forth meeting the Guru. ||16||

Just like Amrit is for people that want to be Amritdhari. Can you imagine me taking somebody who's not a Sikh along to Amrit Sanchar? And I say, "just come along and taste it." All you have to do is to say, "Vaheguru Ji Ka Khalsa, Vaheguru Ji Ki Fateh" five times. When they put it into your mouth, drink it; they put it in your ears and hair. But you don't have to be a Sikh afterward.

How many of you would allow someone to come in and take part in the whole Amrit ceremony and walk outside and say, "I'm not Sikh." No one. So, why do we allow the Anand Karaj to happen?

There are four major ceremonies in a Sikh’s life. During the Janam Sanskar Ceremony, there's a Naam Karan, when the child is given his name. Would you grab a random white kid and bring him here? "Let's get you a Sikh name and give you Amrit?" No. Then there are two other ceremonies: Amrit and Anand Karaj. The fourth one is the Antim Sanskar, the final rites ceremony. They're Sikh ceremonies.

Have your interfaith marriage if you want to. It's your choice. But don't try to force the other person to go around because you want to have a Sikh marriage.

The information above is a transcribed version of the video below.