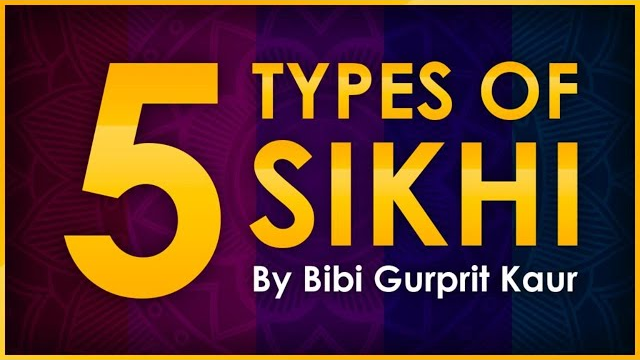 Dhanda means dealings. Here Guru Sahib tells us about those who practice Sikhi to deal with other Sikhs or even with Guru Sahib at times. Some become Dhandey valey Sikh so that no one calls them a Nigura (without a Guru).

They might become Sikhs to get married to a Sikh boy or girl due to wealth or fame. Some also do Seva (selfless service) while making deals with Guru Sahib, that if you give me this or that, I will perform this particular type of Seva. It is not entirely wrong to think about this, but ask yourself this question - Is this the kind of relationship we want with our Guru Sahib? One based on dealings only?

ਐਥੈ ਧੰਧੁ ਪਿਟਾਈਐ ਸਚੁ ਲਿਖਤੁ ਪਰਵਾਨੁ ॥
In this world, people are engrossed in false pursuits, but in the world hereafter, only the account of your true actions is accepted.

Dekha Dekhi means to copy others, just as the saying goes, “monkey sees, monkey do”. It's due to the feeling of wanting to belong or to be included. Many youth these days are trapped in this type, to feel belonged in a particular kind of group, or wanting to be included in the activities, they dress up as a Gursikh. They wear bana, tie big dastaars and wear all kinds of shastars, but deep down, there is no true love for that physical attire of Sikhi or for the One who gave us this attire.

Dekha Dekhi vali Sikhi is more about the external than the internal. 90% of the time, we judge someone based on their appearance, and due to this fear of judgment from our Sikh society, many of our young Sikhs end up practising this type of Sikhi. This type of Sikhi doesn't last long. I have personally seen many who have become Dekha Dekhi Valey Sikh. Due to heartbreak and disappointment with the Sangat they were keeping and following, they have broken apart from Sikhi completely and lost faith. On the other hand, many have come to the actual realization of this type of Sikhi, and with the Kirpa of Guru Sahib, they were able to get out of it and walk on the true path of Sikhi.

The Shabad below summarizes the state of those who practice this type of Sikhi.

Hirsee means greed. This basically refers to anyone who has embraced Sikhi with the motive of greed. It is no doubt that once we walk on the path of Sikhi and Bhagti (Devotional Worship) as prescribed by Guru Granth Sahib Ji, then all the mentioned gifts and boons (such as the nine types of treasures, 18 types of miraculous powers, fame in this world, and the next world) will be placed at our feet for our disposal. But, a Gursikh is never bothered about these boons. Instead, he/she only wants the darshan (glimpse) of Satguru Ji and becomes one with Vaheguru. Many also become Hirsee dey Sikh, because they have greed for followers, fame in the Sikh community, and sadly, to also earn money through this way.

If we look at our itihaas (history), all the Guru Sahibaan have all the powers, but they never once used them for themselves. They very rarely used these powers, and when they did, it was always for the good of others. Guru Arjan Dev Ji, if they wished, could destroy the whole Mughal clan in order to not sit on the hot plate and give Shaheedi (martyrdom). Instead, they showed a great example of what type of Sikh we should be, one who follows Hukam and has a loving fear for Vaheguru.

Bhai Sant Ram Ji, working under the reign of Jahangir, was offered the hand of Jahangir's daughter in marriage due to his honesty, good nature, and faith in God. But he had to accept Islam. He was also offered a high position in the court, land, and wealth as he was from a low-income family. Bhai Sahib Ji refused the marriage altogether, but was pressured by the officials. Bhai Sahib Ji said they would never leave Sikhi for whatever reason it may be. He was then caught and threatened to be brought to the court of Jahangir. Bhai Sahib Ji did Ardaas (humble request) to Guru Sahib, that may his body remain pure and may Guru Sahib protect his honor. Bhai Sahib Ji was punished for refusing to accept Islam, and his head was chopped off. His head was brought to the court of Jahangir, and the princess came to see his head. As she was about to touch it, Bhai Sahib Ji's head rose in the air. The princess and Jahangir were amazed that his body refuses to be touched by the princess even after his death.

Sidak here means faith. Faith is a deep concept, so to understand it, I would suggest you read the history of Bhai Bachittar Singh Ji. Despite being small-sized, Bhai Bachittar Singh Ji was able to win the battle against a drunk elephant that was heavily covered in iron armour. Bhai Sahib had so much faith in Guru Gobind Singh Ji who chose him, patted his back, and gave him a spear to fight the elephant.

We have heard that faith can even move mountains, so think about what we can achieve if we embrace Sikhi with full dedication in Guru Sahib. A Sidak vala Sikh accepts the Hukam of Vaheguru, never turns his/her back to Guru Sahib and whatever happens, has full faith in Guru Sahib.

Bhavna here means sentiments, emotions, mainly referring to the love and devotion a Sikh has towards his/her Guru. Sidak di Sikhi and Bhav di Sikhi are the accepted forms of Sikhi. Guru Angad Dev Ji teaches us how to have sentiments and love for our Guru. Guru Angad Dev Ji gave up everything, and they could never bear even a moment’s separation from Guru Nanak Dev Ji. They did everything Guru Nanak Dev Ji asked, even when those tasks seemed impossible or impractical. Love was above intellect for Guru Sahib Ji.

When speaking about love, Guru Gobind Singh Ji said, those who have love for Vaheguru have obtained Vaheguru.

What Type of Sikh are You?

Now, the question is Sangat Ji, which type of Sikh are we? As I write this, I am also reflecting upon my own Sikhi life and wondering if perhaps I have juggled between these five types of Sikhi? We need to contemplate, and if we feel that our relationship with Guru Sahib Ji is not based on love and faith, then perhaps we need to make some changes and ask for Guru Ji’s blessings to guide us on the true path of Sikhi.