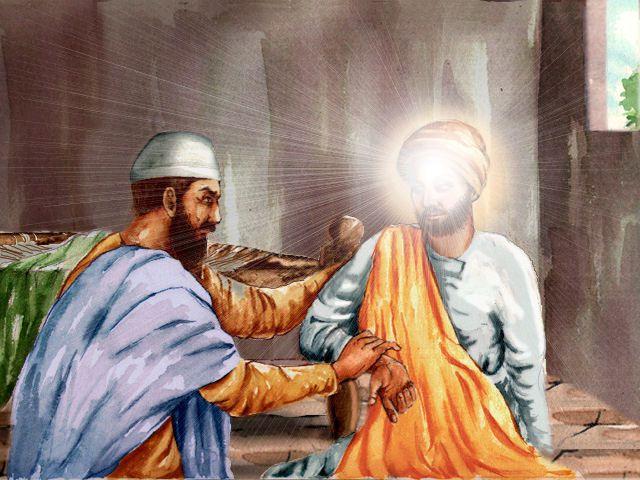 This Shabad tells us the four types of pain/sufferings.

The Pain of Separation - Dukh Veshora

What is the ultimate separation?

The Guru unites the separated ones with the Lord again through the love of the Sweet Name of the Lord.

The Pain of Hunger - Dukh Bhookh

In this phrase, Guru Sahib tells us, the second type of suffering is the pain of hunger. A beggar is suffering from hunger as he has not eaten for days. He begs for money or food so that he can satiate his hunger. Some would even steal or hurt others for food. This pain leads one to do anything just to fill their stomach. Some are also hungry for wealth. They want more money, more possessions, more houses or cars. Their hunger is never satiated.

The hunger of the hungry is not appeased, even by piling up loads of worldly goods.

The fire of desire is deep within; unsatisfied, people remain hungry and thirsty.

The hunger of desire is intense in all those who have forgotten that the only one who can satiate our hunger is Vaheguru. If we were hungry for Vaheguru, we would do anything to be one with Vaheguru. We must make a choice, is it hunger for Vaheguru or hunger for Maya (Worldly Illusion)?

This is the Fear of death. Those who are separated from Vaheguru will have a fear of death. Only Gurmukhs do not fear death, as they know this body is just a vessel and nothing is permanent other than Vaheguru.

The humble servants of the Lord are absorbed in the Name of the Lord, Har, Har. The pain of birth and the fear of death are eradicated.

In the remembrance of God, there is no fear of death.

These Gurbani Pangtiaan (lines) explain how to eradicate the fear of death, through going back to the basics - Simran, Seva, and Sangat.

This refers to the pain of diseases caused to the body. There are three types of diseases mentioned in Gurbani,

Their minds and bodies are diseased due to the pleasures of the world, and their fever never departs.

What is the ultimate medicine for these types of diseases? Guru Sahib says,

The Naam is the panacea, the remedy to cure all ills.

Guru Sahib has given us the medicine to cure all diseases, Naam. Through Simran of Vaheguru we are remembering the one who is without any disease.

In the last Pangti, Guru Sahib says, no worldly doctors can cure these sufferings. They cannot get rid of the pain of separation, satiate our hunger, or cure our diseases. Only the most excellent Doctor, Vaheguru, can do that. The medicine Vaheguru gives us is Naam. That's why Guru Sahib says,

My physician is the Guru, the Lord of the Universe.

He places the medicine of the Naam into my mouth and cuts away the noose of Death. ||1||Pause||

Now that we are aware of this knowledge, let us go back to the roots of Simran, Seva, and Sangat, which will alleviate all the pain and suffering in our lives.