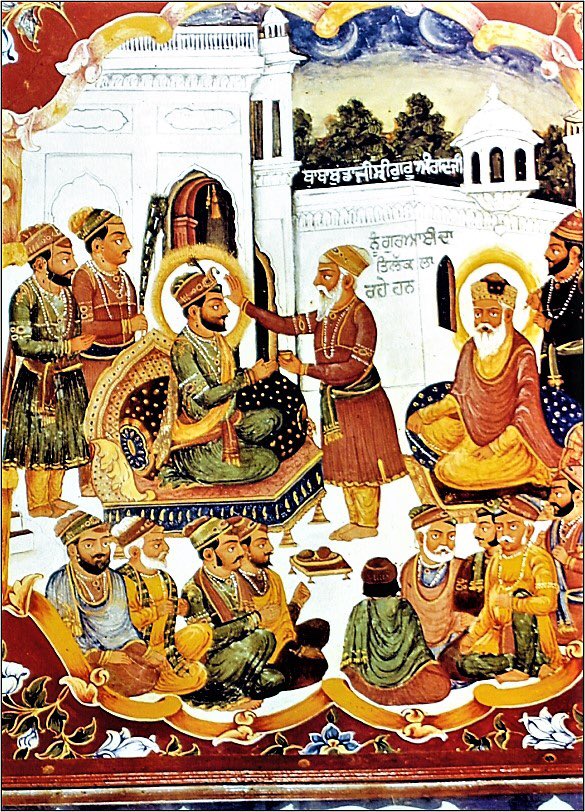 Bhai Lehna Ji led a comfortable life as a trader and shopkeeper. Under the influence of his devout Hindu mother, Bhai Lehna Ji also worshipped Mata Durga, a Hindu goddess. Bhai Lehna Ji was a leader of a pilgrims’ group and led worshippers to the Jawalamukhi Temple every year. Despite the strong focus on Hinduism and leading a devout life, Lehna Ji felt spiritually unfulfilled.

Serving Him, peace is obtained; you shall go to His Court with honor. ||1||Pause||

Later, upon entering the Dharamsala, Bhai Lehna Ji was shocked to see that the man who showed him the way was actually Guru Nanak Dev Ji. He felt disappointed that his Guru walked while he sat comfortably on a horse. Spending time with Guru Nanak Dev Ji, Bhai Lehna Ji fell in love with his message and later returned to his village to share with everyone that he was no longer worshipping Durga, the Hindu goddess.

Bhai Lehna Ji wanted to be close to his Guru and decided to move to Kartarpur Sahib. He informed his family about this transition, entrusting his shop in the hands of his eldest son Baba Dasu Ji. The following Gurbani quote explains the selfless Seva Bhai Lehna Ji did and became One with Guru Nanak Dev Ji.

One who performs selfless service, without thought of reward, shall attain his Lord and Master.

The Sikh Sangat (congregation) was hungry and Guru Nanak Dev Ji told some people, including their own sons, to shake a bare tree for it would give fruit. While everyone else refused to shake a bare tree, Bhai Lehna Ji had full faith in his Guru and went to shake the tree. Some say the tree actually provided fruit.

Bhai Lehna Ji, later Guru Angad Dev Ji, is the perfect embodiment of the following Gurbani quote by Guru Nanak Dev Ji. However, we often use this Gurbani quote to refer to our many incredible Shaheeds (martyrs) but Guru Angad Dev Ji is also an amazing reflection of what it means to give your head to the Guru spiritually. Bhai Lehna Ji wholeheartedly and faithfully served Guru Nanak Dev Ji and did anything that Guru Ji asked without question or doubting them. Guru Ji resigned himself, his Haumai (ego) and his Manmat (desire driven mindset) to follow the Guru’s path.

If you desire to play this game of love with Me, then step onto My Path with your head in hand.

One day, Guru Nanak Dev Ji was walking towards the forest and started beating anyone who tried to follow them with a heavy stick. Others fled rapidly, but Bhai Lehna Ji still followed, saying that Guru Sahib was the only shelter he had. That day, Guru Nanak Dev Ji realized that there was no longer any difference between them and Bhai Lehna Ji. Bhai Ji reflected the same spirit of seva and love for Vaheguru. At the age of 35, after seven years doing seva, Guru Nanak Dev Ji gave Bhai Lehna Ji the name Angad, which means “the limb of Guru'' and gave them the Guruship on Assu Vadi 5 1596 B ie 6th October 1539 AD at Kartarpur Sahib.

At the time of Guru Nanak Dev Ji, there was a basic Punjabi alphabet. Guru Angad Dev Ji further developed the alphabet to give us the Gurmukhi script that we have today. The Gurmukhi alphabet helped to maintain the purity of Gurbani and avoid any potential misunderstandings which could stem from changing pronunciations to match a different alphabet. The name “Gurmukhi,” means “Guru’s script.” The development of Gurmukhi allowed Sikhs to build their own religious identity.

While Sanskrit was taught to high-caste Hindus, Gurmukhi was made accessible to everyone.

Guru Angad Dev Ji formalized the Gurmukhi script and announced that every Sikh should learn this script. This allowed people from any background to understand Sikhi and Gurbani. Building on their love for Seva, Guru Angad Dev Ji started schools to help the underprivileged, teaching them the Gurmukhi personally.

The Mughal ruler at Guru Ji’s time was Humayun. During the 1500s in India, women were thought to be inferior to men. Guru Angad Dev Ji, however, preached that men and women are equal. Guru Ji welcomed women to join the Sikh Sangat and provided them with religious rights that Hindu society did not offer them.

In Guru Ji’s 48 years of life, Guru Angad Dev Ji helped navigate Sikhi through one of its most critical moments: infancy. Given it was still a young religion, it could have easily fallen apart after Guru Nanak Dev Ji. But Guru Angad Dev Ji nurtured it and helped it grow. Like Guru Nanak Dev Ji, Guru Angad Dev Ji traveled significantly to help establish new Gurdwaras and Sangats. He collected all the Gurbani in Pothis (Hymn books). Guru Sahib also started the practice of Mal Akhara (wrestling pits) to instill the importance of physical fitness amongst the Sikhs. He laid the groundwork, both intellectual and physical, for Sikhi to keep blossoming under the future Gurus, who like him, would reflect Guru Nanak Dev Ji’s ideals of Seva and love for Vaheguru.