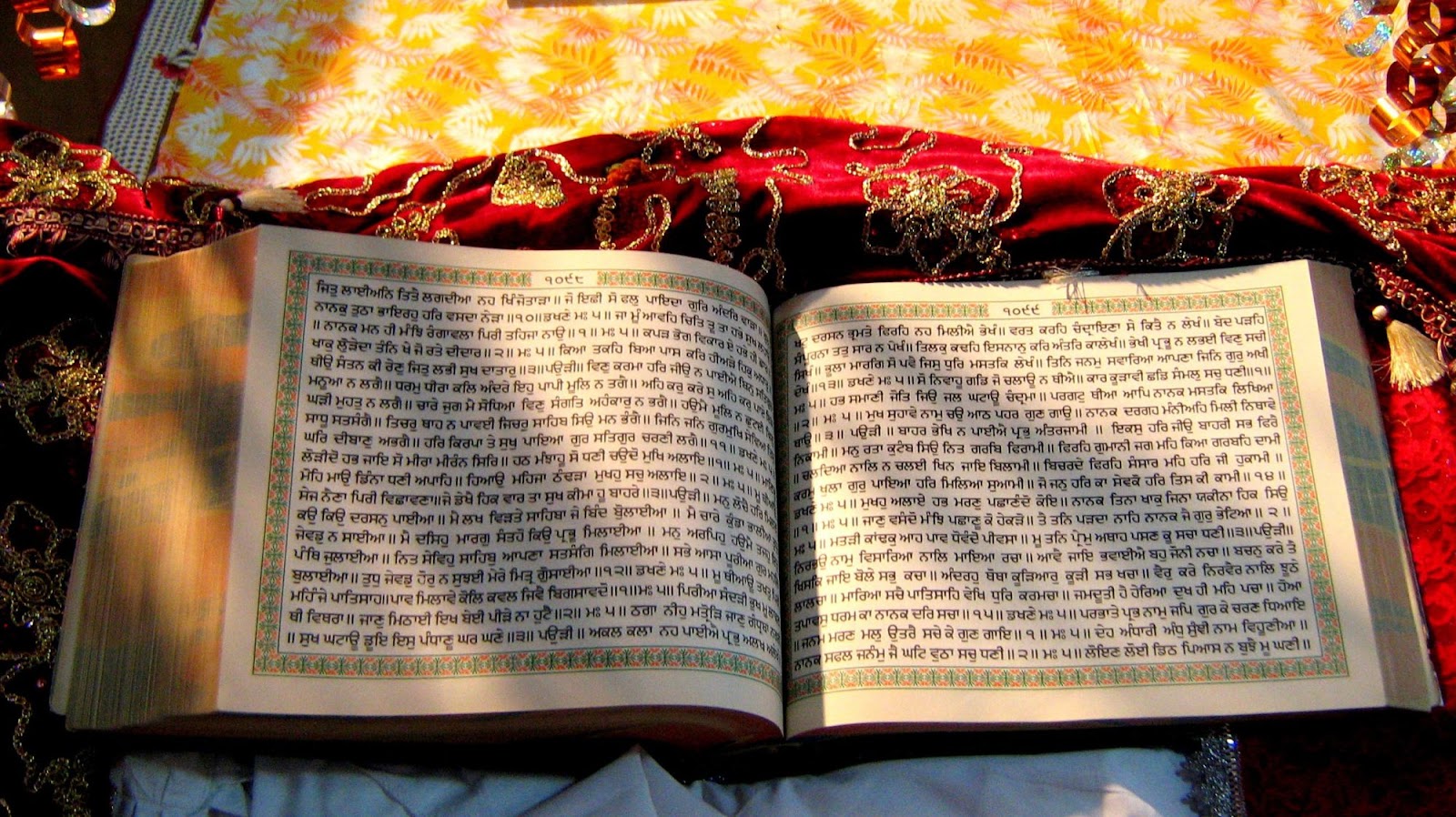 uru Granth Sahib is the universal eternal Guru of the Sikhs. Guru Granth Sahib Ji is the holy scripture of Sikhs’ that is treated with utmost respect and is respected by Sikhs as a living Guru and not merely a scripture. In this article, we will learn about the history of its compilation, Guruship, its structure and the writers.

Prithi Chand, the elder brother Guru Arjan Dev Ji, was enraged when his father Guru Ram Das Ji did not pass on the Guruship to him. So, Prithi Chand started selling compilations of ballads he had written. These were not in line with the Sikhi philosophy and were confusing the Sikhs. In the past, each Guru’s bani was compiled into separate Pothis. Guru Arjan Dev Ji decided to compile all the Bani into a single text and called it the Adi Granth to eliminate any confusion. Guru Arjan Dev Ji describes the Adi Granth in the following Gurbani quote saying:

Upon this Plate, three things have been placed: Truth, Contentment and Contemplation.

The Ambrosial Nectar of the Naam, the Name of our Lord and Master, has been placed upon it as well; it is the Support of all.

Guru Arjan Dev Ji organized it by Raag. Guru Ji asked Bhai Gurdas Ji, the son of Guru Amar Das Ji’s brother and a leading Sikh scholar, to be the scribe. Guru Arjan Dev Ji uttered the Bani and Bhai Gurdas Ji scribed it. It is estimated to have taken 18 months for Bhai Gurdas Ji to finish this task. The Adi Granth was finished on Bhadon Vadi 1, 1661 BK ie. July 31st, 1604 AD. In the Adi Granth, Guru Ji had included their own Bani (Guru’s words) as well as that of the first four Gurus. Guru Ji looked through the Pothis and removed any shabads which had been added by imposters. Guru Arjan Dev Ji also added the Shabads of other Hindu and Muslim Saints, Sikhs and Bhatts. Nearly half of the shabads in Sri Guru Granth Sahib are written by Guru Arjan Dev Ji. This Bir is known as Kartarpuri Bir and is currently in the possession of Dhir Mal’s descendants in Kartarpur Sahib . The Adi Granth was installed at Harmandir Sahib in 1604 AD. Baba Buddha Ji was the first Granthi and was responsible for reading and interpreting the Adi Granth. After the installation of Adi Granth Sahib Ji, Guru Arjan Dev Ji never slept on a bed and did not let Sikhs’ bow down to them. Guru Ji told them to bow down to Adi Granth Sahib. Guru Ji taught the Sikhs’ on how to fully respect the Adi Granth by setting an example for them. Baba Buddha Ji took the first Hukumana which was

The Lord Himself has stood up to resolve the affairs of the Saints; He has come to complete their tasks.

Guru Granth Sahib Ji received the Guruship on Kattak Sudi 2, 1765B i.e. 19th November 1708 AD at Hazoor Sahib, Nanded. While Guru Gobind Singh Ji was in Nanded in 1708 AD, Sirhind’s Nawab Wizir Khan had two of his men stab Guru Ji. Bahadur Shah, the Mughal Emperor of the time, sent the best surgeon to help Guru Ji recover. The wound was stitched and Guru Ji was on the road to recovery. However, when Guru Ji applied lots of pressure to pull a stiff bow, the wound ruptured and bled. In line with the previous tradition of passing the Gurgaddi (Guruship), Guru Ji placed a Kirpan, five pice and a coconut in front of Sri Guru Granth Sahib Ji. The inauguration of Sri Guru Granth Sahib Ji was done in the presence of Panj Pyare - Baba Deep Singh, Baba Gurbaksh Singh, Pyare Bhai Dharam Singh, Bhai Santokh Singh & Bhai Har Singh. Guru Ji told the Sangat that from now on, there will be no living Guru. Instead, Sri Guru Granth Sahib Ji would be the eternal Guru they could turn to for guidance. Guru Gobind Singh Ji ordered his Sikhs that from now on, your Guru is Sri Guru Granth Sahib Ji and there will be no physical Guru anymore. The following quote describes that order and is read in Ardas.

As was ordained by the Timeless Vaheguru, the Panth was established.

To all Sikhs, let this be the order, recognize the Granth as your Guru.

The reverend Guru Granth is the visible body of the gurus.

Those that seek to meet with Vaaheguru, delve into the Shabad.

Sri Guru Granth Sahib Ji has been standardised to 1430 Angs (pages). Sri Guru Granth Sahib Ji begins an index. The first word is “ੴ” or “Ik Onkar” which describes the all-pervading force of Vaheguru. Followed by Basic Nitnem of a Sikh which contains Japji Sahib, Rehras Sahib and Sohila Sahib. Jap Ji Sahib out of these three entries is not written in a Raag.

After Sohila Sahib, the Raag section begins which makes up the majority of the Granth. The Shabads (hymns) are arranged by 31 Raags. A Raag describes the musical scale, structure and how to create a melody. Each Raag reflects a different spiritual mood or tone and is sung at different times of the day. For example, Raag Suhi is used for undying love and extreme devotion. The Lavaan (wedding hymns) are composed in Raag Suhi. On the other hand, Raag Sarang evokes feelings of sadness and longing to meet Vaheguru. There are 31 Raag sections based on the 31 Shudh (pure) Raags in Sri Guru Granth Sahib Ji and within that section, the use of Mishrat (mixed) Raags makes the total Raags used in Sri Guru Granth Sahib Ji 60. Within each Raag, the Shabads are arranged in chronological order by Guru, followed by the Bhagats (Muslim and Hindu Saints). The 31 Main Raags are as follows

After the Raag sections end, there are several compositions that are not written within any Raag. These include:

<
You can help spread the message of Sikhi to people around you by using the leaflet created by the Basics of Sikhi team.
Download
‍You can also check out our other leaflets on the Downloads page.
Posted
in
History
category