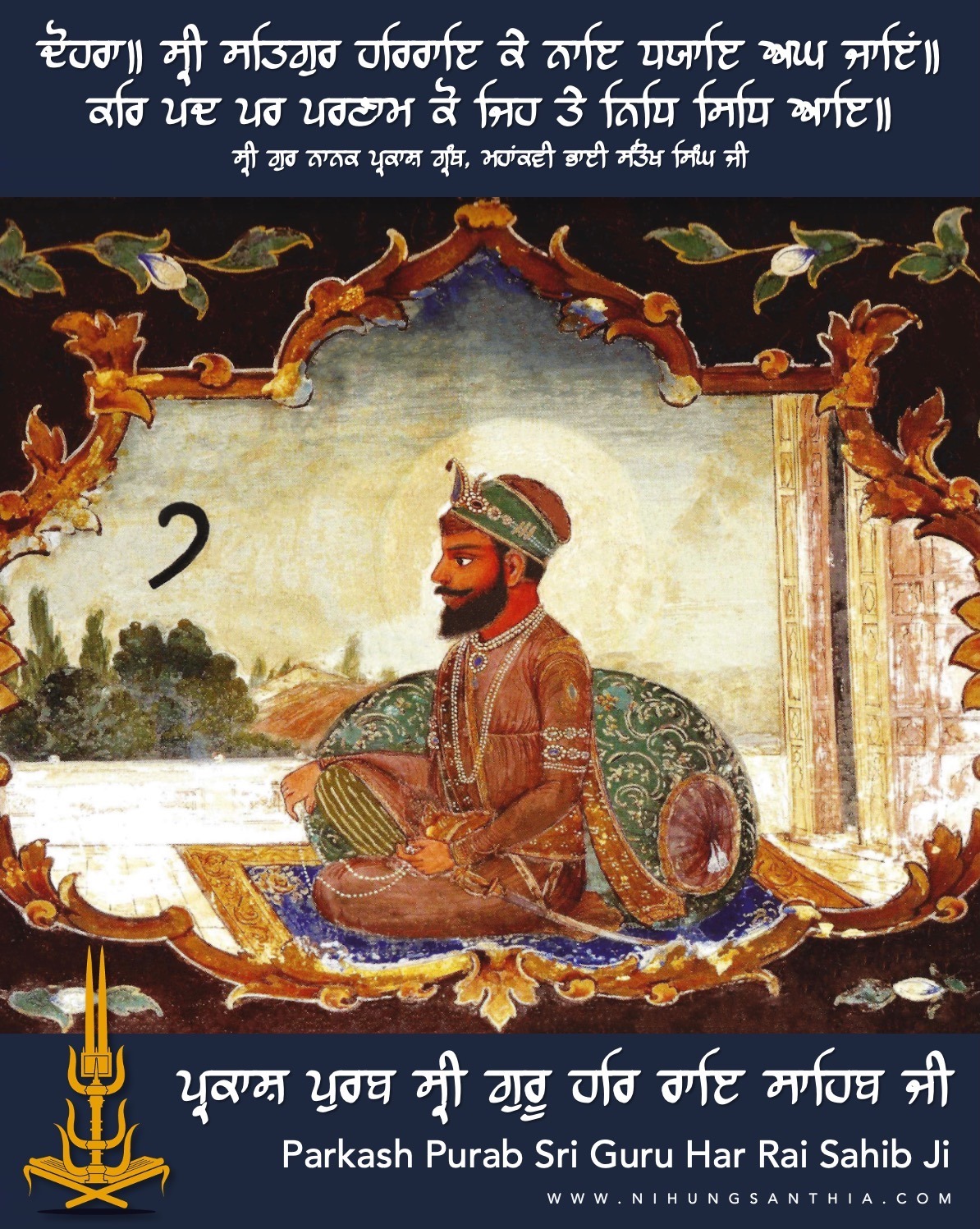 uru Har Rai Ji is the seventh Guru of the Sikhs.

Guru Har Rai Ji was very well versed in traditional medicine. Guru Ji opened a dispensary in Kiratpur to provide free treatment to people in need. Guru Ji ordered that any place providing langar should also provide free healthcare. The popularity of Guru Ji’s dispensaries spread across India. Mughal rulers during the time of Guru Ji were Shah Jahan and Aurangzeb. Aurangzeb, son of Mughal ruler Shah Jahan, felt very jealous that his father preferred his elder brother Dara Shikoh. So, Aurangzeb poisoned Dara Shikoh. Shah Jahan, desperate to save his son, called the best physicians but had no luck. The doctors recommended they ask Guru Har Rai Ji for guidance and the remedy for that poison could only be found in the garden of Guru Har Rai Ji. Shah Jahan was hesitant to ask Guru Ji because Shah Jahan had been sending his armies and troubling Guru Ji and the Sikhs. However, in line with Guru Nanak Dev Ji’s teachings of forgiveness and love, Guru Har Rai Ji never maintained a hostile attitude towards Shah Jahan. When Shah Jahan requested medicine, Guru Ji sent it to him immediately, treating Dara Shikoh.  But this created hatred in the heart of Aurangzeb towards the Sikhs.

Guru Har Rai Ji also established an Ayurvedic hospital, which practicated the ancient Indian study of herbal medicine. Guru Ji helped the Delhi city battle smallpox, cholera and the plague. Guru Har Rai Ji was also the first in the world to introduce the concept of a conservational zoo for endangered and sick animals. Many exotic animals could be found in their garden and Guru Sahib cared and treated these animals.

Preserving the Authenticity of Bani

Aurangzeb, the Mughal ruler, had a hostile attitude towards non-Muslims. Nahar Khan, the Governor of Lahore, sent his army to Kiratpur to attack Guru Sahib Ji. However, the attack failed since the army got cholera. Seeing this, Aurangzeb realized that there was no way to bring Guru Ji to Delhi forcefully. Instead, he asked Diwan Shiv Dayal, a devotee of Guru Ji, to go to Kiratpur and politely invite them to visit Delhi. Guru Ji did not stand by Aurangzeb’s actions and refused to see him. Instead, Guru Ji sent their 11 year old son, Ram Rai to represent the house of Guru Nanak. Daily, Ram Rai demonstrated miracles in the king’s court to display the glory of the Guru’s house. In return, Ram Rai was rewarded thousands of rupees. One Day, Aurangzeb asked Ram Rai the meaning of the following line in Asa Ki Vaar (hymns of Guru Nanak Dev Ji).

The clay of the Muslim's grave becomes clay for the potter's wheel. Pots and bricks are fashioned from it, and it cries out as it burns.

Ram Rai altered the words and changed it from Musalmaan (muslim) to Beimaan (dishonest) in order to avoid conflicts with the king. Ram Rai Ji said that the line had been written inaccurately and the Gurbani was supposed to say “Beiman” (dishonest), not “Musalmaan” (Muslim). The original meaning of this line is that the human soul is not connected to the body in any way. Guru Nanak Dev Ji wanted to explain that everyone, regardless of whether they are Hindu or Muslim, will face the same outcome at death. When Guru Har Rai Ji found out about this alteration of Gurbani, they wrote a letter to Ram Rai Ji and said that he was blinded by the Maya (illusion) and is no longer a member of the Sikh Panth (community). Guru Ji instructed all Sikhs to stop having any interaction with Ram Rai Ji.

Family and Passing the Gurgaddi

Guru Ji bathed with 101 pails of water daily. Guru Ji also wore a 101 pleated Chola (cloak). One day, young Guru Har Rai Ji was rushing to catch up with Guru Hargobind Sahib Ji in the garden. In this hurry, Their cloak swung by and hit a flower, it knocked the flower head off. Guru Sahib Ji had tears in Their eyes out of compassion. Guru Har Rai Ji also developed Kiratpur Sahib. Guru Har Rai Ji was Joti Jot (immersing into the Eternal Light) on Kattak Vadi 9, 1718 B i.e. 8th November 1661 AD at Kiratpur Sahib.