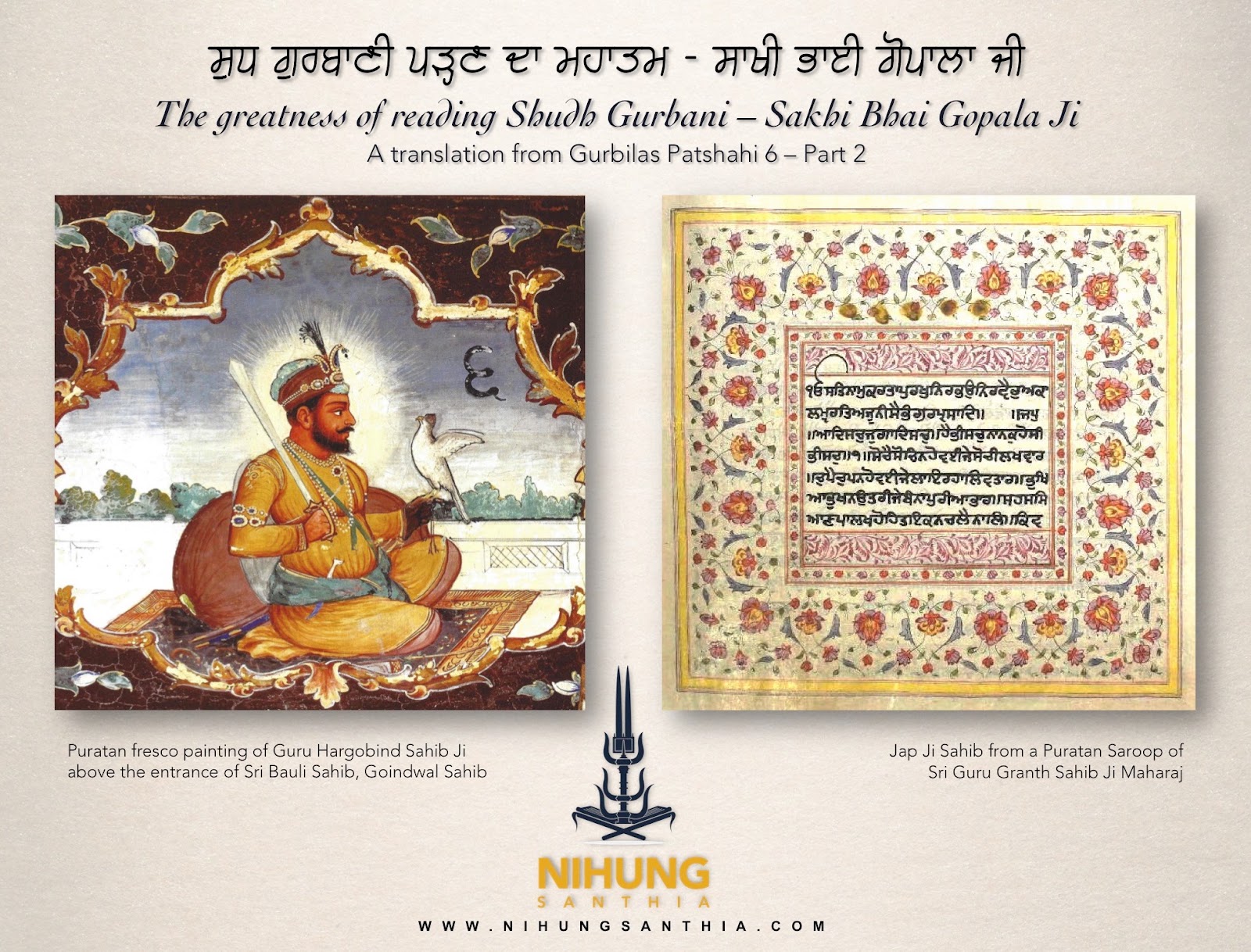 Guru Hargobind Sahib Ji’s parents, Guru Arjan Dev Ji and Mata Ganga Ji did not have a child for a long time after their marriage. One day, Mata Ganga Ji requested Guru Arjan Dev Ji to bless her with a gift of a child as Guru Ji blessed the Sangat with whatever wish they had. Guru Arjan Dev Ji told Mata Ganga Ji to do the Seva (selfless service) of a Gursikh to get the blessings of a child. So, Mata Ganga Ji set off to meet Baba Buddha Ji, a devout Gursikh who had been doing Seva of Guru Sahibs for their entire life. Mata Ganga Ji went to see Baba Buddha Ji like a queen. Mata Ji went in a Pallaki (carriage), wore elegant clothes and had several servants with her. Mata Ji made the request through a servant to which Baba Buddha Ji replied that he is merely a gardener of the Guru’s house and does not have the ability to grant a child. Saddened, Mata Ji returned home and narrated the situation to guru Arjan Dev Ji. Guru Ji advised her to go in humility and seek for the blessings herself went meeting a Saint.  The next day, Mata Ganga Ji prepared Missi Roti, churned butter and prepared buttermilk with her own hands. Mata Ji packed the food along with some onions. Mata Ji carried the meal on her head and walked barefoot for miles and went to see Baba Buddha Ji.  Seeing Mata Ji today, Baba Buddha Ji was pleased. Baba Buddha Ji took the onion and smashed it in half with their hand and blessed Mata Ji with a gift of a son. Baba Ji said to Mata Ganga Ji that such a son would be born in her house that would crush the heads of evil people  just like Baba Buddha Ji crushed the onion. Bhai Gurdas Ji has written the following about Guru Hargobind Sahib Ji in their writing.

This Guru, the vanquisher of armies, is very brave and benevolent.

Guru Arjan Dev Ji gave Sri Hargobind Sahib Ji who was 9 years 11 months and 9 days the Gurgaddi (guruship) on Jeth Vadi 8, 1663 B ie 15 May 1605 AD at Kothri Sahib near Akal Takhat, Amritsar Sahib. Guru Hargobind Sahib Ji decided to wear a ruler’s feather as opposed to an ascetic ornament on their turban. Guru Hargobind Sahib Ji adorned two swords of Miri and Piri. To which, They are known as Miri Piri de Malik (the King of the temporal and spiritual powers). At a congregation, Guru Hargobind Sahib Ji asked Baba Buddha Ji for two swords which they wore on each side of their body. The Sangat (congregation) was shocked to see this. No Guru had ever worn a sword before, let alone two. Guru Ji explained that They would always wear two swords. Lifting the first sword, Guru Ji revealed it represented Miri—temporal authority. Raising the second sword, Guru Ji shared it represented Piri—spiritual authority. Guru Sahib explained that Sikhs will continue to be a peace-loving community who followed Guru Nanak Dev Ji’s teachings. But, Guru Ji wanted them to be able to defend themselves against injustices and not be tyrannized. Guru Ji started giving both political and spiritual directions. Guru Ji asked Sikhs to donate weapons and horses instead of money. Sikhs from across India came to Guru Sahib to bring offerings and enlist in the army. Guru Ji started Gatka practice in Harmandir Sahib after the morning Diwan (program). Guru Ji encouraged heroic ballads to inspire and uplift people. They added Dhuniaan (Odes) to 9 out of 22 Vars (Ballards) in Guru Granth Sahib Ji.  The concept of Miri Piri brought a change into the Sikh Faith by establishing a Sikh army, adorning weapons and inspiring the Sikhs to adorn weapons and learn martial arts as well. Guru Sahib was the first Guru to fight wars against the Mughals, and they won every battle.

One of the greatest moments during Their time was the establishment of Sri Akaal Takht (the Throne of the Timeless Being), where all political, religious and other matters of the Sikh Panth (community) are decided here by the collective Panth. This practice is still ongoing today. This denotes the sovereignty of the Khalsa Panth.

Guru Sahib constructed Sri Akal Takht on 5 Harh 1663 B ie. 1609 AD in front of Harmandir Sahib. Akal means timeless and Takhat means throne in Persian. Guru Ji built the map of the building along with Bhai Gurdas Ji and Baba Buddha Ji. It was completed within 20 days. Guru Ji raised the Akal Takht’s platform to 12 feet, defying then-Mughal emperor Jahanghir who said no person could sit higher than his three-foot throne. Guru Ji often sat on this throne to guide the Sangat and solve disputes. The Akal Takht is built to the side of Sri Harmandir Sahib to imply that spirituality is higher than political duties. Guru Ji would first go to Harmandir Sahib and then Akal Takht, starting the day by connecting with Vaheguru.

As Guru Ji’s influence began to spread, Jahangir and the Mughals were stressed that Guru Ji was undermining their authority. Jahangir did not want to kill Guru Ji because killing Guru Arjan Dev Ji had backfired and made the Sikhs stronger. Instead, he asked Guru Ji to pay a fine and said Guru Arjan Dev Ji owed it. Guru Ji declined to pay this unjust fee and was imprisoned in Gwalior Fort from 1609 to 1612 when they were between 14 and 17-years-old. There, Guru Ji found several other Hindu rulers who had been imprisoned on unclear charges. Inside the fort, Guru Ji would hold twice-daily diwans. Outside the fort, Sikhs from all over would walk hundreds of miles to be near the presence of Guru Ji. Seeing this devotion from the Sikhs, Mian Mir, a respected Muslim saint with a love for Guru Ji, decided to ask Jahangir to free Guru Ji. Jahangir agreed to free Guru Ji. However, Guru Ji refused to leave until all the imprisoned kings were also freed. Jahangir said that anyone who could hold the tassel of  Guru Ji’s robe could leave. So, Guru Ji got a special robe built with 52 tassels. Each ruler could thus hold on to the outfit and be released. Bhai Gurdas Ji writes in his vaaran that the true Guru is a liberator, saying:

The true Guru is giver of freedom from bondages and makes the detached ones librated in life.

Guru Ji came to be known as “Bandi Chhor” or the liberator of prisoners. Baba Buddha Ji supposedly illuminated the entire city of Amritsar with lights to celebrate Guru Ji’s homecoming. While this happened to coincide with the Hindu Diwali, the Sikh Bandi Chhor Divas is a completely separate celebration.

Building a Connection with Jahangir

Jahangir and Shah Jahan were Mughal rulers during the time of Guru Hargobind Sahib Ji. Jahangir slowly began to favor Guru Ji and became friendly with them. He ordered Lahore’s Governor Wazir Khan to respectfully bring Guru Ji to Agra. Guru Ji spent a few days with Jahangir. Jahangir was curious to learn why Guru Ji was called “Sache Patshah” meaning the True King. During this time, Guru Ji and Jahangir went hunting. A grass-cutter mistook Jahangir for the Guru. He put a coin in front of him and asked for some spiritual wisdom. Jahangir replied that he can’t give him such a thing. Then the grass-cutter took his coin back quickly. He went towards Guru Sahib Ji and requested the same and kept that coin in front of Guru Sahib Ji. Guru Ji blessed him and he said, Dhan O Sache Patshah, you are a great true king. Thus, Jahangir  realized why Guru Ji is the true king because Guru Ji can fulfill the wishes of this world and the other world. Guru Ji went on a trip to do Parchaar (preaching) across India, including Kashmir and some locations which Guru Nanak Dev Ji had visited. Jahangir came to visit Guru Ji at Goindwal Sahib and offered financial assistance for the construction of the Akal Takht, which Guru Ji declined. After Jahangir died, his son Shah Jahan took over the throne. Shah Jahan decided to reverse his father’s policy of reconciliation with the Sikhs. Throughout his life, Guru Ji fought four major battles over various disputes such as land being stolen from Sikh towns, hunting disagreements, as well as self-defense.