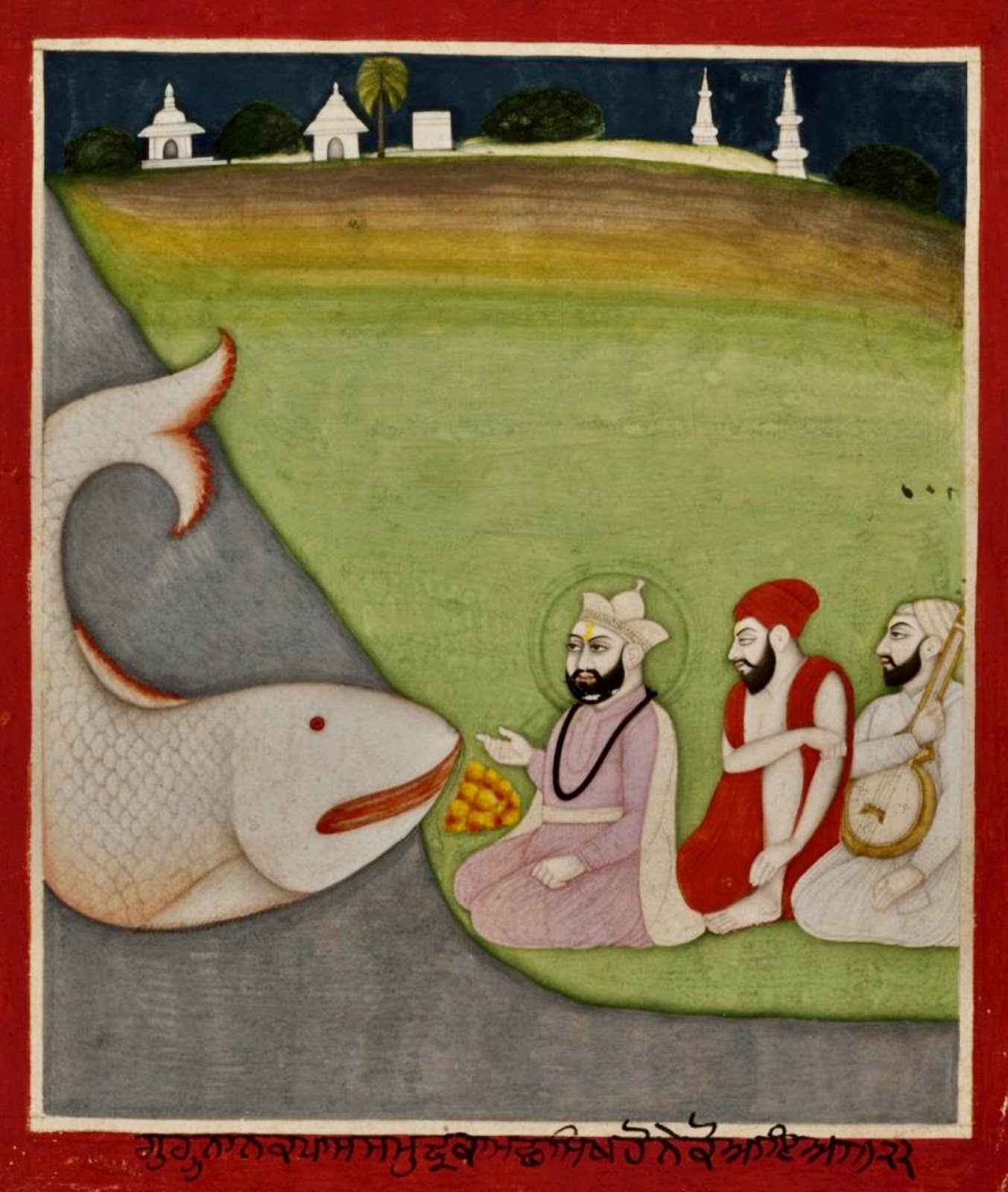 Why did Guru Nanak Dev Ji come to Earth?

The benefactor Lord listened to the cries (of humanity) and sent Guru Nanak to this world.

Mughal rulers during the time of Guru Nanak Dev Ji were Behlol Lodhi, Sikandar Lodhi, Ibrahim Lodhi, Babar and Humayun. In the following Bani quote, Guru Nanak Dev Ji explains the situation of people when rulers had taken away their freedom and righteousness and truth did not exist.

The Dark Age of Kali Yuga is the knife, and the kings are butchers; righteousness has sprouted wings and flown away. In this dark night of falsehood, the moon of Truth is not visible anywhere.

Guru Nanak Dev Ji established many fundamental values that Sikhs around the world still follow till today, some of which include the 3 basic principles of Naam Japna (recitation of God’s Name), Kirat Karni (earning an honest living) and Vand ke Chakna (sharing with others).

Given Guru Ji was born in an upper-caste, at the age of nine, their parents arranged a ceremony for Guru Ji to receive a Janeu, a sacred Hindu thread that high-caste men wear which marks the start of their formal education. When the priest, Pandit Hardayal, came to drape the thread on young Guru Nanak Dev Ji, Guru Ji stopped the priest and asked about the purpose of wearing a Janeu. Guru Ji questioned why it was only restricted to upper-class men? Why are lower-class people and women not allowed to wear Janeu?

The Pandit explained to Guru Ji that it is not any thread, but instead a sacred Janeu which would distinguish upper-caste, encourage moral actions, and help in the next life. Pushing back against familial and societal pressure, Guru Nanak Dev Ji refused to wear the Janeu saying that the thread was temporary—easily broken and dirtied—and promoted inequality.

Then Guru Nanak Dev Ji gave an Updesh (teaching) which is recorded in the Asa Ki Vaar and is as follows.

Make compassion the cotton, contentment the thread, modesty the knot and truth the twist.

This is the sacred thread of the soul; if you have it, then go ahead and put it on me.

They disappeared during a morning bath in the Vain River. Days passed and everyone, except Bebe Nanaki Ji, gave up hope on finding Guru Ji again. Three days later, Guru Ji appeared from the river unharmed and uttered the words “Na koi Hindu na koi Musalman,” meaning “there is no Hindu or Muslim.” Everyone originates from the same Vaheguru. Hearing this, Sultanpur town’s Nawab Daulat Khan was shocked and decided to test if Guru Ji actually believed this by asking Guru Ji to partake in Namaz (Muslim prayer), at the mosque. Unhesitating, Guru Ji went to the mosque to participate in the Namaz. However, during the actual prayer, Guru Ji did not perform the Namaz. The Qazi (Muslim priest) later asked Guru Ji, why you did not perform the Namaz? Guru Nanak Dev Ji replied, you were not here doing the Namaz so who should I have done my Namaz with? The Qazi was simply reciting the Namaz without any concentration. Instead, he was thinking about how to protect a newborn farm animal from falling into the well. Guru Ji made him realize that one must do their prayers with love and devotion while paying full attention to what they are saying, only then they will be able to connect with the divine. In Pauri 21 of Japji Sahib, Guru Nanak Dev Ji says to clean your soul through connecting to Naam.

Pilgrimages, austere discipline, compassion and charity. These, by themselves, bring only an iota of merit.. Listening and believing with love and humility in your mind, Cleanse yourself with the Name, at the sacred shrine deep within.

Throughout their 70 years of life, Guru Nanak Dev Ji went on Udasis (travels) around the world, to the East, South, North (Himalayas) and to the West (Rome, Arab countries) to spread the truth. Guru Ji traveled with Bhai Bala Ji and Bhai Mardana Ji, a longtime Muslim companion, who would play the Rabab, an Afghani instrument, every time Guru Ji recited Bani (teachings). During one of these Udasis, Guru Nanak Dev Ji traveled to a village called Saidpur now known as  Aimanabad, Pakistan. At this city, Guru Ji received an invitation to join a feast from a rich and high-caste man, Malik Bhago who looted and cheated poor people. Guru Ji refused and instead went with Bhai Lalo Ji to his house. Bhai Lalo Ji was a poor carpenter and was Shudra, a low-caste. Guru Ji being the Kshatriya caste, were not supposed to interact with them. However, Guru Nanak Dev Ji,  rejected such caste-derived inequalities as Bhai Gurdas Ji writes in his writings:

With Guru Nanak Dev Ji’s effort, all the four castes have become one. Now, they can all join together in sangat and attain liberation.

Malik Bhago got furious that Guru Ji refused his invitation and sent several more invitations to Guru Ji. Guru Ji accepted the invitation and went to his place. Malik Bhago offered them varieties of food and asked Guru Ji why they preferred the basic food of a carpenter to the elaborate feast of a well-known rich person. Guru Nanak Dev Ji replied , “Malik Bhago you take advantage of others, while Bhai Lalo Ji earns an honest living. You have done this feast to cover up your demerits whereas Bhai Lalo serves people with love and compassion”.

Guru Ji gave a teaching to everyone through this incident that one should work hard with honesty to earn a righteous living and not take advantage of others to earn that living.

Vand Ke Chakna: Sharing With Others

At the age of 18, Baba Mehta Kalu Ji gave Guru Nanak Dev Ji twenty rupees to make a profitable bargain. While traveling to the market with Bhai Mardana Ji, Guru Ji came across a group of saints who had not eaten for days. Guru Ji spent those twenty rupees to feed the saints. Upon returning home and facing Mehta Kalu’s anger, Guru Nanak Dev Ji explained that they had done a “Sacha Sauda” (True Bargain). Guru Nanak Dev Ji started the concept of Langar (community kitchen) and sharing with others regardless of socioeconomic status, gender, race, caste, etc. In the following GUrbani quote, Guru Ji explains that serving and sharing with others is also a way to connect to the divine.

Through the Udasis and Gurbani, Guru Ji was able to connect with a lot of people around the world. Guru Ji blessed Sikhs with Raag Kirtan (Classical Sikh devotional music) and the Gurmukhi alphabets. Guru Ji’s Jot (light) is contained in the next nine living Sikh Gurus and Sri Guru Granth sahib Ji. Guru Nanak Dev Ji is one of history’s leading revolutionaries. Guru Ji promoted equality in India’s inherently unequal caste system, challenged meaningless religious rituals, and interacted lovingly with everyone regardless of religion or socioeconomic status. Guru Nanak Dev Ji’s Joti Jot (immersing into the Eternal Light) day falls on Assu Vadi Panchami, 1596 B which converts into 11th October 1539 AD.