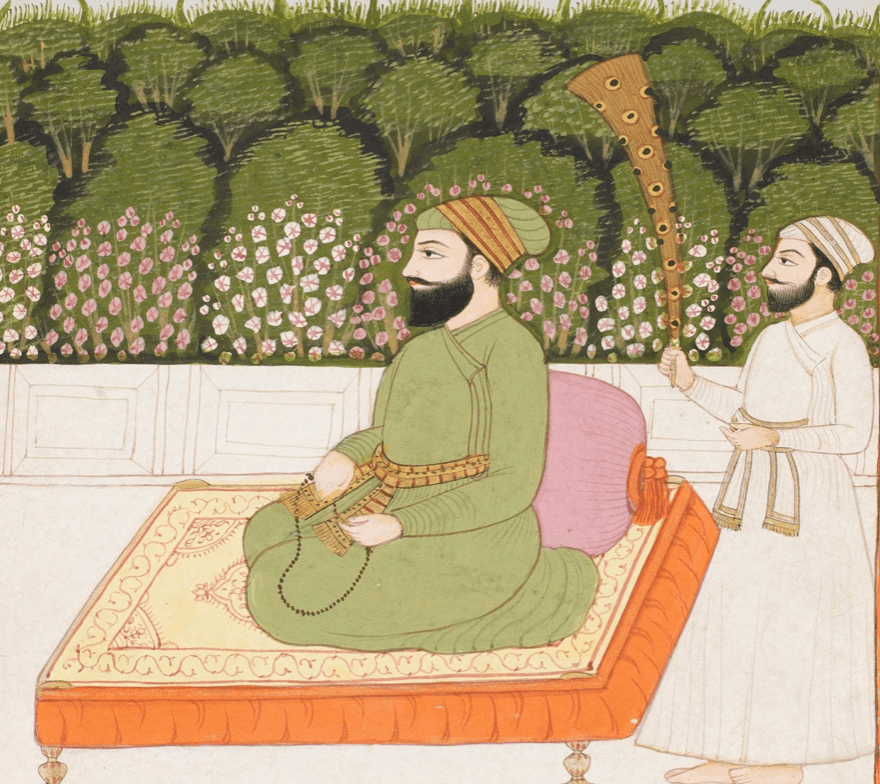 Now Guru Ram Das, a Sodhi emperor, seated on the Guru-seat is called the true Guru. He dug the complete holy tank and here settling down at Amritsar, he spread his light.

His maternal grandmother took him back to her village Basarke, near Amritsar, where they struggled to make ends meet. Bhai Ram Das Ji made his living selling roasted chickpeas. Similar to Guru Nanak Dev Ji’s Sacha Sauda (True Bargain), once, when Bhai Ram Das Ji came across some starving saints, he offered them his chickpeas for free and went home without any earnings.

The Brahmins were unhappy with the rise in Sikhi’s popularity because a society which prioritized equality would not be advantageous for them and their high status. When Akbar stayed in Lahore, Brahmins decided to draft a complaint against Guru Amar Das Ji.

Akbar supported Bhai Ram Das Ji’s answers and offered him a robe of honor. Bhai Ram Das Ji returned to Guru Amar Das Ji where he continued to immerse himself in Seva.

The city flourished into an important center of trade for Punjab. Bhai Ram Das Ji helped create the Santokhsar Sarovar and started a Langar (community kitchen) for the workers and anyone else to take meals.

Guru Amar Das Ji was debating which of Their son-in-laws, Bhai Ram Das Ji or Bhai Rama Ji, to make Guru. Both were dedicated Sevadars. To ensure that there was no conflict, Guru Sahib worked to make the selection process transparent.

Bhai Ram Das Ji, on the other hand, asked for the wisdom to do it again properly. Seeing this, the Sikhs were convinced that Bhai Ram Das Ji would be the next Guru for he had a love for seva.

As Bhai Gurdas Ji writes in his Varaan:

From Guru Amar Das came Guru Ram Das who through his service to the Guru, became Guru himself.

This Guruship would not go beyond Sodhis because none else can bear with this unbearable. The thing of the House should remain in the House.

Guru Ram Das Ji was destined for Jyoti Jot (leaving Their body) much earlier. However, Guru Amar Das Ji gave Them his remaining 6 years, 11 months, and 11 days so that Guru Ram Das Ji could continue sharing about Sikhi and help others attain Mukti (liberation).

Guru Ram Das Ji created the Lavaan, which is now used in the Sikh Anand Karaj. Guru Ram Das Ji’s son Sri Arjan Dev Ji and Mata Ganga Ji were the first to get married with the Lavaan.

The Lavaan describe the four stages of spiritual growth for a married couple:

In the first round of the marriage ceremony, the Lord sets out His Instructions for performing the daily duties of married life.

In the second round of the marriage ceremony, the Lord leads you to meet the True Guru, the Primal Being.

In the third round of the marriage ceremony, the mind is filled with Divine Love.

In the fourth round of the marriage ceremony, my mind has become peaceful; I have found the Lord.

The Lavaan helped to formalize Sikh marriage, enabling Sikhs to step away from Hindu Vedic traditions and claim their own identity.