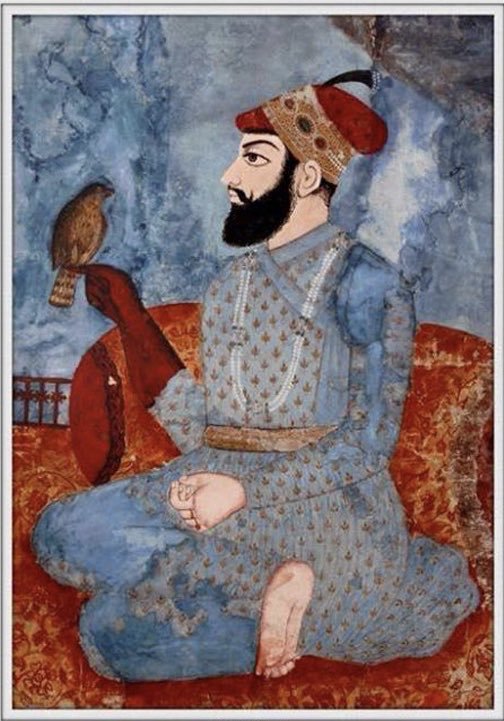 Guru Har Krishan Sahib Ji, the eighth Sikh Guru, developed smallpox while doing Seva (selfless service) of people who had the disease. They instructed the Sikhs to find the next Guru in Baba Bakala, the city where Guru Tegh Bahadur Ji was living at the time. Guru Tegh Bahadur Ji got the Guruship on the same day as Guru Har Krishan Ji was Joti-Jot which was on Chet Sudi 14, 1721B i.e. 6th April, 1664 AD. At that time, Guru Tegh Bahadur Ji, Mata Nanki Ji, their mother and Mata Gujri Ji, their wife had been staying in Bakala Sahib for 26 years. Guru Sahib did meditation for all those years in a basement room. It was Bhai Makhan Shah Lubana who discovered Guru Sahib and told the world that he had found the Guru.

Dhir Mal, Guru Hargobind Singh Ji’s grandson and Guru Tegh Bahadur Ji’s nephew, was angry that Guru Ji was given the Gurgaddi, not him. So, he went to Bakala and tried to pose as the Guru. When this failed, an enraged Dhir Mal told Shihan, a Masand (Sikh representative), to go and shoot Guru Ji. When Guru Ji survived this attack, Dhir Mal was even angrier and decided to go and rob Guru Ji’s belogingings. Makhan Shah, decided to go with others and bring back Guru Ji’s belongings. However, Guru Ji told Makhan Shah to return everything back to Dhir Mal. Guru Ji explained that Sikhs should not keep anger and a desire for revenge in their hearts. As Guru Ji discusses, anger is a dangerous poison which causes people to lose all sense of right and wrong:

The heart is filled with anger and violence, which cause all sense to be forgotten.

Guru Ji fulfilled both the Miri (temporal) and Piri (spiritual) aspects of their life. In line with Miri, or temporal authority, Guru Ji was actively involved in the fight for justice. At the young ages of 13 and 14-years-old, Tegh Bahadur Ji participated in the battles of Guru Ka Chak (now known as Amritsar) and Kartarpur. According to the Piri (spiritual authority), Guru Tegh Bahadur Ji was very connected with Vaheguru and Simran (remembering Vaheguru). Guru Ji embraced Hukam (Vaheguru’s will), even in difficult times, such as when their brother Baba Atal Rai Ji passed away at a young age. Guru Ji did not care for worldly possessions. All Guru Ji wanted was to be able to connect with Vaheguru. Harji, the corrupt masand managing Sri Harmandir Sahib, banned Guru Ji from entering the Gurdwara because he wanted to save all the offerings for himself. Guru Ji had no regard for collecting money. So, Guru Ji simply did Simran (remembering Vaheguru) outside the Harmandir Sahib Gurdwara premises. Today, that spot is marked by Gurdwara Thara Sahib. It is about 100 yards away from Sri Akal Takht Sahib.

Mughal emperor at the time of Guru Tegh Bhadur Ji was Aurangzeb and he decided to make India a Muslim country. He began charging non-Muslims a tax and forcefully converting Hindu temples into mosques and Hindu people into Muslims. So, Pandit Kirpa Ram Dutt and 15 other Kashmiri Hindu Pandits came to Guru Tegh Bahadur for help. They knew that nobody left the house of Guru Nanak empty-handed. Gobind Rai, Guru Tegh Bahadur Ji’s son, told Guru Tegh Bahadur Ji that they were the best person to help the Hindu pandits find justice. Guru Ji told the Governor of Kashmir that if he can get Guru Ji to convert, the pandits will also convert. The Governor told Aurangzeb, who decided to have Guru Ji captured. On July 12, 1675 AD, Guru Tegh Bahadur Ji was arrested along with other prominent Sikhs including Bhai Mati Das Ji, Bhai Sati Das Ji, and Bhai Dayala Ji. Guru Ji was brought to Sirhind. Before getting arrested, Guru Tegh Bahadur Ji gathered the Sikhs and shared that They were passing the Gurgaddi (Guruship) to Their son Gobind Rai. In Sirhind, the Governor kept Guru Ji prisoned in Basi pathan Prison for 4 months and 8 days in the court of Delhi. Leading Islamic individuals tried to convince Guru Ji to convert, however, Guru Ji did not change Their mind, which infuriated Aurangzeb.

Aurangzeb decided to bring Guru Ji to Delhi in a cage. The Qazi (Muslim priest) gave a Fatwa (religious order) that Guru Ji embrace Islam, show a miracle to prove their divinity, or be prepared to die. To scare Guru Ji, Aurangzeb had Bhai Mati Das Ji, Bhai Sati Das Ji and Bhai Dayala Ji killed in front of Them. Bhai Mati Das Ji was cut in half with a saw. Bhai Sati Das Ji was wrapped in flammable cotton and burned to death. Bhai Dayala Ji was boiled alive. Guru Ji still didn’t bow down to fear and convert.

For the sake of Dharma (righteousness), Guru Tegh Bahadur Ji sacrificed Himself.

He laid down His head, remaining uncompromising in His principles.

After Guru Ji’s Shaheedi, there was a ruling to ensure nobody was allowed to cremate their body or head. Bhai Jaita Ji, dressed as a scavenger, took Guru Tegh Bahadur Ji’s head back to Anandpur to Guru Gobind Singh Ji. Bhai Lakhi Shah Vanjara took Guru Tegh Bahadur Ji’s body into his house and lit it on fire to give Guru Ji a proper cremation without drawing attention to the actions. This location is now known as Gurdwara Rakab Ganj Sahib.

Shortly before achieving Shaheedi, Guru Tegh Bahadur Ji wrote a letter detailing the purpose of life to their family. This writing is now known as Salok Mahalla 9 and is at the very end of Sri Guru Granth Sahib Ji. Guru Ji’s Shaheedi draws parallels to the Tuk from Salok Mahalla 9:

One who is not touched by pleasure or pain, greed, emotional attachment and egotistical pride,

Guru Ji was not influenced by the Qazi’s promises of worldly pleasures in exchange for converting to Islam. Nor was Guru Ji troubled by the idea of death and suffering. Instead, Guru Ji chose the path which would bring justice for the Hindu Kashmiri Pandits, disregarding Their own happiness and pride. So many people have given their life to protect their religion and community. Guru Ji gave their life to protect people from a completely separate religion. While Guru Ji did not wear a Janeyu (sacred Hindu thread), Guru Ji achieved martyrdom so that others could have the right to wear it. Guru Gobind Singh Ji writes in about Guru Tegh Bahadur Ji’s motives for Shaheedi (martyrdom) in the Sri Dasam Granth Bani:

He protected the forehead mark (tilak) and sacred thread (of the Hindus), which marked a great event in this age of Kaljug (era of sin).

For the sake of Saints, He laid down His head without even a sign of pain.

This one-of-a-kind Shaheedi (martyrdom) clearly embodies the Sikhi values of equality and prioritizing justice. In this way, Guru Tegh Bahadur Ji sacrificed Themselves to save the honor of the Kashmiri Hindu Pandits. They became the second Guru to become a Shaheed (martyr). They are also known as Hind di Chadar (the protector of Hindustan)