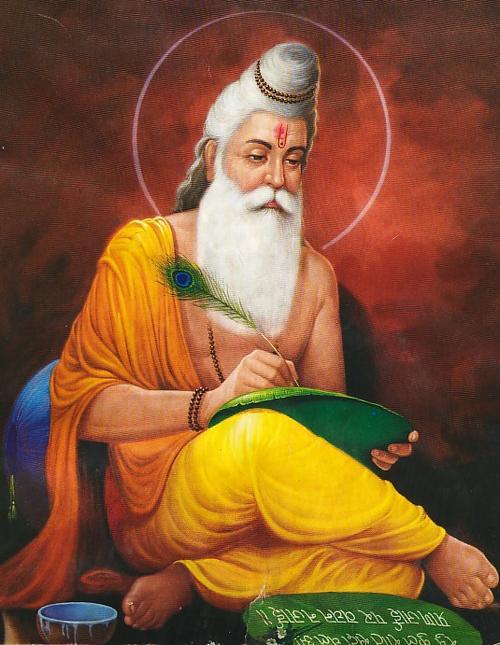 A great Rishi (inspired poet of the Vedas) was born on Puranmashi (full moon) in the month of Assu (mid-September to mid-October) in Treta Jug. He was born into a very good family and from his early life, he was a great devotee. As he was born in a royal family, he was also skilled in martial arts and weaponry.

It is mentioned in many scriptures that he used to go to the jungle and meditate for many years. Once, he meditated as such for many years, until termites started to build a home on his body. In Sanskrit, the home of termites is known as Valmik. When he came out from his meditation and got up from the dirt that covered his body, everyone started calling him Valmiki. His name as a child was different, but no one knows that name now.

In Hindustan, he was the top scholar of Sanskrit and was accepted as the first incarnation of Brahma. Due to his intense meditation, he could tap into the past and future. He knew everything and had already attained knowledge on the life of Sri Raam Chandar Ji (Incarnation of Treta Jug). Hence, he wrote Ramayana, the scripture about the life of Sri Raam Chandar Ji, in Sanskrit. The other Ramayana was written based on this scripture by Rishi Valmik Ji.

Once he had obtained full wisdom of Ramayana, he called his servant and reached the bank of the Tasma River. This was his first time at this beautiful river. He kept walking, and then he sat down by the river. The riverbank was very beautiful and green. He was very happy and took a bath in the river. While bathing, he reached the other side of the river where under a tree, two Brahminy Ducks, a male and a female, were fondling each other lovingly. The ducks looked very happy. Rishi Ji was looking at the ducks when suddenly a hunter came into the scene. He killed the male duck. Seeing this, the female duck became saddened and started wailing. Upon witnessing this, Rishi Ji went into a rage. He recited a verse in Sanskrit that meant, ‘Oh hunter, because you have killed the ducks, for this you will die fast, and your wife shall suffer as the female duck did.’

After this incident, he pondered on why he said such words, but when he recalled the verse, he was pleased. He repeatedly sang the verse. Finally, he told his servant to memorize this verse. The servant did as told.

Rishi Ji couldn’t take his mind off the event that took place. The scene kept on playing before his eyes, and with a saddened heart, he walked back to his ashram.

Even at the ashram, he kept reciting the verse. Finally, he made up his mind to write Ramayana in this style of verse (slokas). Rishi Ji started writing Ramayana in salokas (verses).

He wrote in-depth verses with deep thoughts and hidden meanings. He started gaining wisdom,  secrets of the law of grammar and styles of poetry. When he entered deep meditation and looked within, he could see and follow all the characters from Ramayana, such as Raam Chandar Ji, Sita, Lachman and more. It was to the extent that Rishi Ji could hear and see Raam Chandar Ji laughing, speaking, smiling and playing. He could recall all the events that took place in Raam Chandar Ji’s life.

Rishi Ji then got his servants to bring papers, and he started writing Ramayana, which was divided into 7 chapters, 745 sargam (key notes), 24000 slokas (verses).

Rishi Ji had just completed the main section of Ramayana when Sita Ji came to his ashram due to banishment from Raam Chandar Ji.  Rishi Ji told the servants to serve Sita Ji with full respect. After some time, Sita Ji gave birth to two sons named Kush and Luv. Rishi Ji gave a lot of attention to the upbringing of the children and started teaching them when they were young. Together with Sanskrit, Rishi Ji taught them music and martial arts. He also taught them Ramayana.

Kush and Luv became great scholars of Sanskrit and music in no time. They then became great emperors. They were experts in all types of martial arts and weaponry. Rishi Ji thought that the children should spread the greatness of Ramayana to the whole world, so he told the children to memorize Ramayana. Within a short period, they memorized 24000 verses from Ramayana. On top of that, they would sing these verses with their beautiful voices. Each one of them bought a lute each, which they played when singing the verses.

When both Luv and Kush were ready, Rishi Ji permitted them to go to distant places to preach the great Ramayana. Both equally good-looking princes, great scholars, and strong as Raam Chandar Ji, would sit with sages, poets, and the general public. They would play their lute and sing the verses from Ramayana. Their sweet voices heightened the standard of poetry. When they sang, the listeners would be so pleased that some would even feel detached from the world. Tiny droplets of tears made up of faith, sympathy, and pure devotion would fall from their eyes. Every man and woman would follow them while singing their praises. Luv and Kush were not just singing poetry, but they were also spreading a new message. Whatever was happening in the past was happening again in the present. Luv and Kush would return to the ashram after preaching to the public. They respected their mother a great deal.

During those days, to be a universal ruler, Sri Raam Chandar Ji decided to have a sacrificial ritual. He let go of a horse and announced that whoever can catch this horse would have to fight with Lachman. Lachman, with his army, started chasing the horse. When this horse reached the ashram of Rishi Ji, Luv and Kush caught hold of that horse and tied it under a tree. When Lachman came to the ashram, he told the children to release the horse, but they refused. “We like this horse very much; we would ride on this horse. You can take another.”

“But this is a sacrificial horse. So whoever caught this horse would have to fight with me.”

“We are ready to go to war against you, but we will not let go of this horse,” said the brothers.

Lachman told them to prepare for the war. Luv and Kush had learned the art of war from Rishi Ji, and how can one who learned from Valmik Ji be defeated? The two brothers took their bow and arrow, wore their armor, mounted on their horses, and left to the battlefield. Witnessing the army of Lachman, they said, “If you have the strength, then attack us!” Lachman released an arrow, which Luv blocked with his arrow. Then, Luv and Kush released arrows in such a way that Lachman’s army was defeated. Lachman was shocked to see this, and he tried to negotiate with them, but even he was defeated by Luv and Kush.

When Sri Raam Chandar Ji heard about Lachman’s defeat, he sent Shatrughan, his youngest brother, with an army to defeat Luv and Kush. But even Shatrughan couldn’t defeat them and lost.

Upon hearing about the defeat of Shatrughan, Raam Chandar Ji sent Bharat, his brother, who tried to negotiate with Luv and Kush but failed. They defeated Bharat’s army, and Bharat fell to the ground.

Luv and Kush narrated Ramayana to the whole of Ayudhya. Sri Raam Chandar Ji, after listening to his own life story, said, ‘Until this world remains, Rishi Valmik’s katha (discourse) will remain, great is Rishi Valmik Ji!’

In his later part of life, Rishi Ji wrote Uttarakhand, the last Valmiki Ramayana book. This way, Valmik Ji was known as a great scholar and warrior. He had all the virtues of a deity. Today, if the world knows the story of Sri Raam Chandar Ji, that is because of Rishi Valmik Ji. He spent many years of his life writing Ramayana.