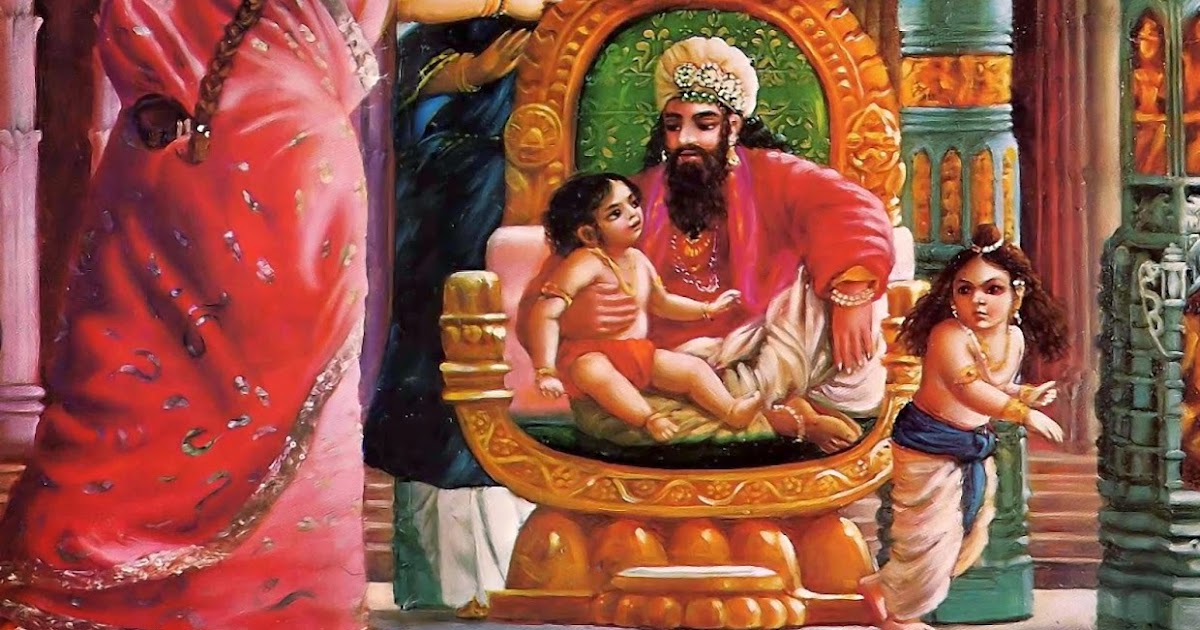 In the age of Satjug (truth), there was a Bhagat named Dhru. He was born in the house of King Uttanpad, and his mother’s name was Suneeta. Suneeta was a religious and truthful woman. King Uttanpad had two wives, the younger wife, Suruchi, was beautiful but fickle-minded and full of jealousy. She controlled the King and always kept him in her palace. She had a son as well, who always played with the king. Suruchi never let Dhru play with his father, due to which Dhru never got to enjoy a father’s love. For a child who doesn’t get fatherly love, their upbringing is incomplete, and they often go through mental distress.

The Mistreatment of Bhagat Dhru

Bhai Sahib Ji describes that one day, while playing with the children, Dhru went into the palace. He was pleased and laughing away. The King saw his happy child, and the fatherly instinct in him aroused. He carried Dhru and placed him on his lap. The king hugged Dhru, caressed him, and spoke lovingly to his son. At this time, Suruchi came and was burning with jealousy. She wanted her son to be the king and not Dhru. When she saw Dhru in the King’s lap, she got angry, grabbed Dhru by his arm, and said, “You cannot play in the King’s lap. Go away and never return to this palace!”

The king kept quiet and didn’t say anything to his wife, Suruchi. He was captivated by the beauty and youth of his wife. The lust he had for his wife stopped him from correcting her misbehavior. He didn’t have the strength to tell her that it was his right to love and care for his son as a father.

The Response of Bhagat Dhru’s Mother

On the other hand, Dhru, who was upset, went running to his mother. He wondered why he was not allowed to sit in his father’s lap and started crying. When Suneeta saw her son crying, she became worried. She carried him, put him on her lap and asked, “My son! What happened to you? Did anyone hit you? Why are you crying so much? Tell me.”

Dhru narrated the whole incident, upon which the Queen said, “Alright, my son. My beloved. You should not have sat in your father’s lap. You have no rights, my son.” The queen hugged Dhru tightly and kissed his face. She was crying.

“Mother, tell me truthfully, are you a queen or a maid? I cannot tell.”

“Son, we should worship God. By meditating and worshipping God, you can obtain what you wish for.”

“Alright then, mother, I am going to meditate!”

“Son, now is not the time for you to start meditating. You are still young. What will I do after you leave? How can I survive without seeing my son every day?”

Nightfall came, but Dhru was not feeling sleepy. He could see the anger of his stepmother, how she grabbed him and scolded him. He got up and looked at his mother, who was sleeping. Dhru decided to leave the house. No one saw him leaving the palace.

At this time, Narad Muni came. When Dhru saw Narad Muni, he asked, “Are you God?”

Narad replied, “No child, I am not God. God lives far away. You cannot go there.”

Narad said, “You are still young. I know you are the son of King Uttanpad. Tapoban is far away. The way there is quite dangerous. You have to cross a dark forest. The wild animals will eat you. Your body will not be able to handle hunger, thirst, the hot and cold weather. Come, my child; I will bring you back to your father. He will give you half of his kingdom.”

Dhru laughingly said, “I have not met God, and I already can obtain half the kingdom. If I do meet God, then I definitely would get the whole kingdom. Look here, I do not know you, but if you are stopping me from meditating on God’s Name, then you are my enemy. Please leave me.”

Narad Muni was surprised to hear this response from a young boy. He looked at the child and thought he must be a great devotee in the form of a child. Naarud Muni then advised, “Alright, child, you are right. To do devotional worship is the greatest action. Remember this mantra, ‘Om Namo Bhagvatey Vasudevya,’ close your eyes, and focus on ‘Keshav Kalesh Hari.’ Through this mantra, you will face no trouble, and all your tasks shall be done effortlessly.” After giving this advice, Narad Muni disappeared. Dhru walked for a bit, then sat on a stone and meditated.

The State of the Kingdom Upon Dhru’s Departure

On the other hand, Queen Suneeta got up and looked around. When she didn’t see her son beside her, she got worried and started looking. “Dhru, my son, where are you?” All the servants heard and started looking for Dhru. This news of Dhru’s disappearance reached King Uttanpad.  He was about to leave for the palace of Queen Suneeta when Queen Suruchi stopped him. She urged, “Don’t go! They can find Dhru themselves. He must have played a trick to worry you.”

King Uttanpad stopped, and by this time, Narad Muni came and walked towards the King and said, “Hari Narayan, Oh King, what is the matter today? You look shocked. Did Queen Suruchi scold you?” After hearing this, King Uttanpad became ashamed. The king bowed down and said, “Narad Muni, I am worried as my son, Dhru, is missing.” He then shared the story of what happened the day before with Queen Suruchi.

“Hari Narayan”, said Narad Muni. “O’ King, your son is not lost. He has reached Tapoban and is doing devotional meditation. You hurt the child’s heart, O’ King! You have been mistaken. You have been blinded with attachment to power and lust for your wife. You have become the slave of youth and lust. You didn’t give love to your son and hurt the feelings of Queen Suneeta. Hence, you shall always be in sorrow and pain. Your son, Dhru, is doing meditation on ‘Keshav Kalesh’ and will obtain the kingdom.”

Upon hearing this, King Uttanpad felt ashamed and was surprised to hear about Dhru. He asked Narad Muni, “Is it true that Dhru has gone? This is bad news. Please bring him back. I am ready to give half of my kingdom to him.” Narad said, “O’ King, look, Dhru will definitely do his meditation.”

After this, Narad Muni went to see Queen Suneeta. He consoled her and said, “Oh Queen, don’t worry, be happy. Your son will become a Bhagat.” King Uttanpad went to the forest and tried to bribe and lure Dhru to return, but he failed. After King Uttanpad left, Dhru gained more faith and trust that meditating is the right thing to do. He started worshipping God.

Vishnu went to Tapoban and took form in front of Dhru. Vishnu was pleased and gave blessings to Dhru. Vishnu said, “Go, the kingdom is yours. You will rule for 26,000 years, and you shall be known until the end of this universe.” Dhru went back to his palace, and King Uttanpad gave him the kingdom. Dhru ruled for 26000 years.

Bhai Gurdas Ji writes about the life of Bhagat Dhru in their Vaaran (Ballads, known to be the key to unlocking the wisdom of Sri Guru Granth Sahib Ji).

One Creator, the primal energy, realized through the grace of the Wondrous Enlightener

Boy Dhru came smiling to his palace and with full of love, his father sat him on his lap.

Seeing this, the stepmother got angry and caught hold of his arm, pushed him out of the father’s lap (the king).

Tearful with fear, he asked his mother whether she was a queen or a maidservant?

O’ son! I was born a queen, but I did not remember God and did not undertake acts of devotion (and this is the reason for yours and my plight).

Dhru asked, With what effort can the kingdom be obtained and how can enemies turn into friends?

His mother replied, Worship The Lord and thus, the sinners also become pure.

Listening to this and getting totally detached in his mind, Dhru went out to the jungle to meditate.

On the way, sage Narad taught him the technique of devotion and Dhru quaffed the nectar from the ocean of the Name of the Lord.

After some time, King Uttanpad called him back and asked Dhru to rule forever.

The Gurmukhs have won over the world, and the sinners have lost.