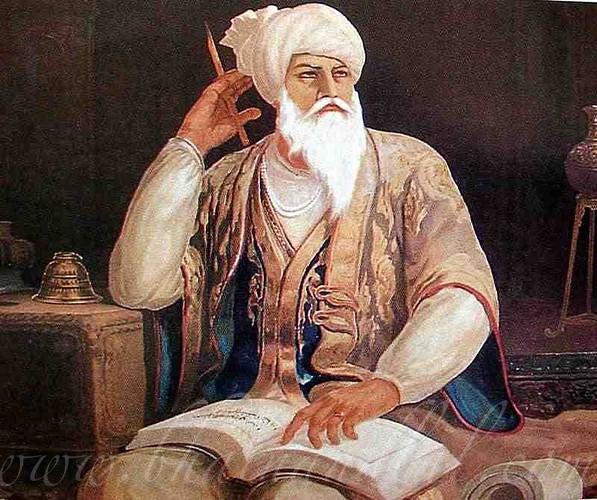 Before diving into the Tankhanama we must note that according to Mahaan Kosh by Bhai Kahn Singh Nabha (Sikh lexicographer and encyclopedist (1861 - 1938)), Tankha means religious punishment given to a Sikh who has violated the Rehit (Spiritual Discipline) given by the Guru. Since Guru Gaddi (Guruship) was passed to Guru Granth Sahib Ji, a Tankha is given by the Panj Piaare in the presence of Guru Sahib. This is where a Sikh or Amritdhari (initiated Sikh) can come forward and admit his/her mistakes. The Panj Piaare will then collectively give a Tankha for a certain period, this might vary from reading extra Bani (Guru’s Words) daily, to doing Seva (Selfless Service) daily in the Gurdwara. The main idea through a Tankha is to reconnect us with Guru Sahib Ji and Sikhi, which will aid us in not repeating the mistake.

This next section of the article is directly translated from the Tankhanama (code of punishment) which was revealed by Guru Gobind Singh Ji to Bhai Nand Lal Ji. You will notice that this is in the form of a question and answer.

Which actions are acceptable and which are not appropriate for a Sikh.1.

Nand Lal! Listen to my words; these are the behavior of a Sikh,

Without Naam, charity, mental and physical purity, a Sikh should not savor food.2.

One who does not go into Sat Sangat (True Congregation) in the early morning will be penalized.

One who goes into the Sat Sangat half-heartedly will not be able to find refuge anywhere.3.

While listening to katha and kirtan, if one starts talking, says Gobind Singh, that person goes to hell.

If one comes across a poor person and does not help him/her, that person is a Tankhahi (religious delinquent).4.

One who speaks without the knowledge of Shabad Guru will gain nothing.

One who does not bow in reverence to Shabad Guru will not receive the blessed vision of the Primal Being.5.

One who distributes Parshaad (Ceremonial Pudding) but has greed in mind,

Gives little to some and more to others; that person will always remain in agony.6.

Sweep and plaster the floor, scrub the floor and wash the utensils.7.

Take a shower and wear clean clothes. Do not say anything apart from Vaheguru.

Take an iron pitcher and fill it with clean water. Gobind Singh says that the body who does as told is blessed.

Once the Karah Parshaad is ready, place it on a stool. Kirtan should be done and heard from all four directions.8.

One who places the seal of the Turks on his head and places his sword at the feet of the Turks,

One who does not go into the holy congregation distributes the sacred pudding (Karah Parshaad) without any code of conduct,

One who wears red (bright colors) and takes snuff (powdered tobacco), Gobind Singh says, he shall be punished by the Messengers of Death.10.

If women equivalent to mothers and sisters come into Sangat, and one looks at them with evil and lustful eyes,

A Sikh who is hot-tempered, who does not bestow his daughter in proper marriage,

One who takes money from daughters and sisters will be pushed around by the Messengers of Death.11.

A Sikh who walks around without iron arms/weapons will suffer in the cycle of life and death.

One who takes the possessions of a guest, all his worship and prayers become useless.12.

Comb your hair twice a day, wear your turban layer by layer.

Brush/clean your teeth daily, and you shall not suffer any pain, Lal Ji.13.

One who never gives one-tenth of their earning and earns a living through falsehood,

One who does not shower with cold water and eats before doing Jap Ji Sahib,

One who disrupts other’s affairs through gossip, cursed is the life of the one who renounces righteousness.

One who does not fulfill the promises made, that person will not gain honor anywhere.16.

One who eats meat from the hands of Turks, who utters words other than Gurshabad (The Guru’s Words),

One who listens to Triya Raag (Feminine Wiles), Listen, O’Lal, that person will go to hell.17.

One who commences a task without doing Ardaas (a Humble Request), eats without offering to others first,

One who takes unwanted belongings and brings another’s wife to his bed.18.

One who sees a guest coming, but does not offer anything to them, will not be honored in the court of Vaheguru.

One who does not listen to Kirtan (Devotional Music) and Katha (Discourse) wholeheartedly speaks rudely to a Saint or a Sikh.19.

One who indulges in slandering, gambling, and takes other’s belongings forcefully, that person will suffer the pain of death.

Do not listen to the slander of your Guru; take your kirpan and cut the head of the slanderer.20.

One who does not keep a charity cash box (keeping one-tenth of your earning aside for Guru) and indulges in deceitful trade,

A Sikh who eats without uttering Vaheguru first,  who goes to the house of a prostitute,

Who has a love affair with another’s wife, Gobind Singh says, he is not my Sikh. 22.

One who has an affair with the Guru’s wife and is deceitful, that person is a great sinner.

One who forsakes the Guru and begs from others and sleeps at night with no clothes.23.

One who indulges in sexual activity naked, or while naked, takes a shower,

One who walks around naked, who eats bareheaded,

Who distributes sacred pudding bare-headed, that person is a sinner.24.

One who forsakes the teachings of the Guru listens and follows other’s instructions,

There is no place for that person in this world, and hereafter, that person will suffer in hell.

That person will go through the cycle of life and death and get beaten by the Messenger of Death.25.

If the creation is in pain, Nand Lal, then the Creator will be offended.26.

Everyone exclaims to the Timeless Being; no one cares about the slanderers.

The forest and mountains in all three worlds will remember the Timeless Being.32.

Listen, Nand Lal! This is the truth. I will reveal my reign in this world

I will bring all the four castes into one and get everyone to remember Vaheguru.33.

The Sikhs will ride horses and fly falcons. Seeing this, the Turks will run away in fear.

I will make one Khalsa fight a hundred and twenty-five thousand enemies, and these Singhs will be liberated.34.

Spears will be waved, and elephants will be decorated. Drums will be beaten at every door.

When a hundred and twenty-five thousand candles are lit, know that the Khalsa has attained victory.35.

Khalsa will rule, and there will be no enemies left.

All will be joined under one banner, and those who come into the sanctuary of the Guru will be saved.36.

-This Marks The Completion Of The Code Of Discipline-