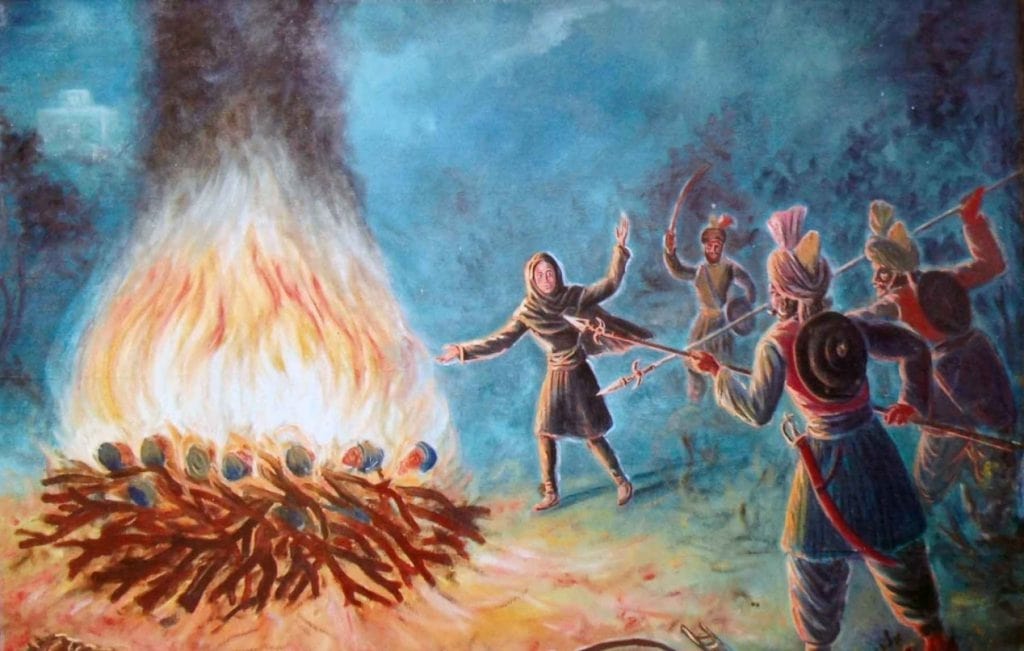 We may know of the Gursikhs that became Shaheed in Chamkaur Garhi and some of us talk about the 40 Gursikhs who obtained Shaheedi. Guru Gobind Singh Ji Maharaj (king of kings), has already left Chamkaur Sahib. There was one other person who lived very close to Chamkaur Sahib and her name was Bibi Sharan Kaur Ji. We may often hear about our brothers who obtained Shaheedi, but it was our sisters as well who sacrificed their lives. Keeping the Shaheedi of our sisters in mind, let us remember that the Panj Kakkars are not only for our brothers but our sisters too. Guru Gobind Singh Ji said that women could wear Kirpans and protect themselves. Bibi Sharan Kaur Ji is an example of this.

How Did She Do That?

Soon after the battle of Chamkaur took place, Bibi Sharan Kaur Ji heard the news. She heard of the Shaheed Singhs whose bodies were left on the battlefield. Approximately ten minutes away from Garhi Sahib in Chamkaur is a Gurdwara Bibi Sharan Kaur Ji knew of. Bibi Sharan Kaur Ji goes to her mother and said, "Ma, I am leaving today and I am going to do the Sanskaar (final ceremonial rites) of my brothers”. When she is about to leave for Chamkaur di Garhi, her mother asks, "How are you going to go and how are you going to get there?" Bibi Sharan Kaur Ji says, "Don't worry about that". Sometimes it is not necessary to worry about how we are going to do things but to just do the Seva (selfless service) and Guru Sahib will clear any obstacles in the way for you. Bibi Sharan Kaur Ji makes her way to Chamkaur Sahib and upon arrival, she sees all these bodies on the battlefield. As she makes her way through the bodies, she begins to identify which bodies belong to a Gursikh, and which belong to Mughals.

On the battlefield, there are thousands upon thousands of Mughals, but very few Gursikhs. How does one distinguish between forty Gursikhs and tens of thousands of Mughals? These bodies were cut up, one limb here, and another limb elsewhere. The Panj Kakkar (the 5 Ks) are the Nishani (symbol) Guru Gobind Singh Ji adorned their Sikhs with. It is common to see a Gursikh walking down the street, and to see a Karra (iron bangle) on their arm, a Dastar (turban) on their head, a Gatra (holster) across their body, and a Kirpan (sword) on their left hip. Even if an individual is cut into little pieces one will know it is a Sikh of Guru Gobind Singh Ji, because they will have a Karra on their arm. If the arm is not visible, their Kachera (undershorts) may be visible on their legs. If there is a body with the limbs cut off, their Gatra and Kirpan will be visible on their body. If all four limbs and the physical body are absent, their long-flowing Kes (uncut hair) or Dastar (turban) would be visible. You would see the Kangha (wooden comb) inside the Dastar. Whether someone is alive or dead, you know that it is a Sikh of Guru Gobind Singh Ji. Bibi Sharan Kaur Ji continued to collect all the body parts of the Gursikhs, and she lit a big fire. During this time, she was not 25 years old, Bibi Sharan Kaur Ji was not 30 or 40, she was only 16 years old. She's picking up corpses to collect her brothers' arms, legs, and bodies to place them on a funeral pyre and to do an Antim Sanskaar (final ceremonial rites). When Bibi Sharan Kaur Ji is doing this, a big fire is lit and the Mughals see the fire. The Mughals come to see Bibi Sharan Kaur Ji, but she does not respond to them. She is reading the Bani that we should read every night before going to bed, Sohila Sahib.

O Inner-knower, Searcher of Hearts, O Primal Being, Architect of Destiny: please fulfill this yearning of my mind.