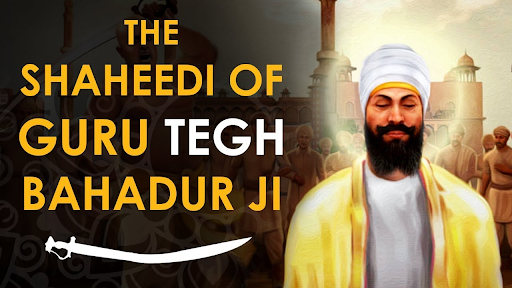 e frequently find ourselves engrossed in worldly attachments. The ninth Sikh Guru, Guru Tegh Bahadur Ji teaches us that nothing is permanent in this world, not even our life. After witnessing the Shaheedi (Martyrdom) of their three Gursikhs (Sikhs of the Guru) in front of their eyes, Guru Ji lived up to their name by not only mastering the use of a sword but also by sacrificing their life to the Tegh (Sword) so that others could continue to practice their faith. This article discusses the Sakhi (True Story) of Guru Tegh Bahadur Ji’s Shaheedi in a confined manner.

In hopes that the Shaheedi of their Gursikhs would terrorize Guru Teg Bahadur Ji into submission towards Islam, Guru Ji’s captors asked Them, “you have just witnessed three of your Sikhs tortured, burned and boiled. Are you not afraid of death?” Guru Ji responded by asking, “what death are you talking about? I have spent my whole life singing the songs of death. When people would talk of death, I would sing passionately of death. I have spread the message and truth of death and you are trying to instill the fear of death in me?” Once again, Guru Ji was asked to accept Islam.

Asked to Perform a Miracle

Guru Ji was then asked to perform a Karamaat (Miracle) as it had always been the Mughal emperor Aurangzeb’s desire to see Guru Ji perform a miracle. Upon hearing this, Guru Tegh Bahadur Ji laughed and said, “how many more miracles do you want to see? My three Sikhs just showed you the miracles”. Bhai Mati Das Ji was smiling. With each pore of his body he recited the Bani (Guru’s words/teachings) of Guru Nanak Dev Ji as he was sawed in half while alive. The words of the Guru coming out of Bhai Dayala Ji’s mouth could be heard as he was put in a pot of hot boiling water while taking his last breath. Even when Bhai Sati Das Ji was burned alive, his body fell in Guru Teg Bahadur ji's direction. Guru Ji was then asked if they had any last wishes before their death. Guru Tegh Bahadur Ji responded, “before you sever my head from my body, I wish to have a Ishnaan (Bath). Then I will sit down cross-legged, close my eyes and will recite Japji Sahib Ji (First Sikh prayer recited daily). When I am done, I will fold my hands together and bow my head down to Guru Nanak Dev Ji. The moment when I bow my head down, you may cut my head off”.

The executioner by the name of Jalaal-Din comes to Guru Tegh Bahadur Ji and starts a conversation with them. Jalaal-Din tells Guru Ji that this executioner job runs in his family. Jalaal-Din explains, “I am from a place called Samanna, my father and grandfather were both executioners. It was at the hands of my grandfather that your grandfather Guru Arjan Dev Ji attained Shaheedi”. Guru Teg Bahadur Ji responded, “this trade of being a Jalaad (Executioner) may run in your family, but there is also a trade that runs in my family and that is the trade of Shaheedi”. Guru ji then explained to jalaad that his trade will come to an end one day.He will not be carrying out executions forever. Nobody is going to remember him and his family. But Guru ji’s grandfather, Guru Arjan Dev Ji was a Shaheed. Their trade will continue until this Panth (Sikh Community) remains. Their Sikhs will continue to give Shaheediya. Jalaal-Din was puzzled by this. Guru Tegh Bahadur explains, “we will keep on going to give our blood and as it will fall upon this Earth, it will make the foundation of Sikhi deeper and deeper and deeper. You are helping us".

Jalaal-Din then walks away to sharpen his Tegh (Sword). As he sharpens his Tegh, the Tegh starts to gleam. Jalal-Din looks up hoping to catch a glimpse of fear from Guru Teg Bahadur Ji. Guru Tegh Bahadur Ji speaks again, “never forget O' Jalaal-Din! My name is Tegh Bahadur. I had the privilege to fight alongside my father Guru Hargobind Sahib Ji. The Tegh that you are sharpening and are trying to instill fear in me with, I had wielded that Tegh in my hand. Always remember one thing O’ Jalaal-Din! If I know how to use the Tegh, then I also know how to take the Tegh. I am ready for your sword!” This is exactly what happened. Guru Ji attained Shaheedi in November 1675 in Chandni Chowk, Delhi,India.

This article is a transcribed version of the video‍