The Story Of Gautam Rishi And Ahliya 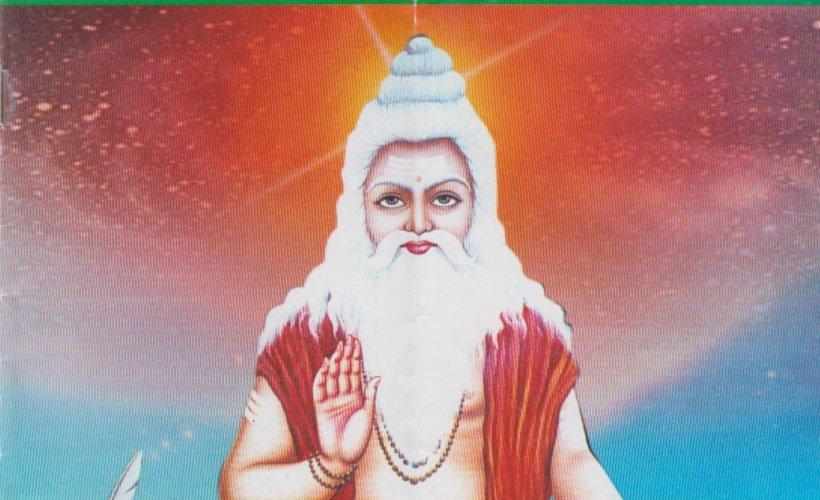 The Story Of Gautam Rishi And Ahliya

ince the ancient times in India, there have been many ways to worship God. The devotees of God would carry out different practices based on how their teachers taught them. Though there were different practices, the intention was always to sing the praises of God. Amongst the devotees, there was one named Gautam Rishi. He is mentioned in Gurbani (Guru’s Words),

Sukh Dayv and Preekhyat sing His Praises, and Gautam the rishi sings His Praise.

This means, in whichever way, Gautam Rishi sang the praises of Vaheguru, became a beloved devotee of God. In the Puranas (Hindu Scriptures), one of his stories is mentioned, and this is how the saints tell the story.

Gautam used to worship Shivling-Shaligram. For many years he did aggressive meditation, upon which King Shiva (Deity of Destruction) was very impressed with him and gave him a boon. He said, “Oh Gautam, whatever you ask, you shall receive. I shall fulfill your wishes.”

Gautam accepted this offer and was delighted. He started spending his days in meditation. One day, through his intuitions, he found out that the daughter of Mudgal, whose name was Ahliya, was going to get married. She was gorgeous, and every man wanted to marry her. Many deities like King Indra (King of Demigods) were also ready to marry her. Many of these deities started fighting over her, and Ahliya’s father didn’t like this, as they had lustful thoughts about her. He pleaded to King Brahama to advise the deities and think of a solution. Brahama listened to his prayers and summoned all the gods to a meeting.

The Competition for Ahliya Begins

Brahama said, “Look everyone, Ahliya is indeed very beautiful, but she needs a husband now and all of you are more than ready to make her your wife. If this is so, you will have to follow the code of conduct of a Suambar (an ancient Indian custom of a girl choosing her spouse in an open assembly or through competition). The one who can go around the whole earth in 24 minutes, and returns first, shall be the one to marry Ahliya.”

Everyone was shocked to hear this, but eventually they accepted the challenge. Brahama’s and Indra’s sons were also very confident that they could win this challenge. This challenge, they thought, was quite an easy one. On the other hand, Gautam, who had heard about the beauty and grace of Ahliya, also created the desire to marry Ahliya. He said a prayer to Saligram Shivling. In no time, Saligram appeared in front of Gautam and said, “Oh Gautam, if this is your wish, then it shall be fulfilled. Just circumambulate me. It is equal to circling the whole Earth in 24 minutes. Everyone, including Brahama, will be a witness to this.”

The race began. Gautam circled the Saligram stone. Deities like Indra were rotating at a higher speed than the wind itself, but every time they looked, Gautam was at the same pace as them. Everyone was shocked. Some even tried to kill him, but it was to no avail. With the help of Saligram, Gautam was the first to reach Brahama. Brahama was pleased and decided to wed him to Ahliya. Upon hearing this, the deities were upset and jealous of Gautam. Some even wished to steal Ahliya away with their magical powers and strength, but no one could do anything in front of Brahama. They left in dismay. Gautam brought Ahliya to his Ashram (home/place of meditation), which was situated at the banks of the Ganges River. He continued his meditation. The story of winning the race spread fast, and many people praised Gautam.

Gautam is Forced to Commit a Sin

Suddenly, a disaster struck the town. King Indra was furious, and so it didn’t rain for many days. The Earth beneath dried up. The saints, scholars, and the villages were all in distress due to a lack of food. Gautam, upon witnessing this, felt sad, and compassion filled his heart. He prayed to Saligram and pleaded for strength to start a free kitchen to serve these people.  Saligram fulfilled his wish, and soon enough, Gautam served food to everyone. There were so many blessings that they never ran out of food. Everyone ate as much as they wanted. Everyone was singing the praises of Gautam.

Indra’s rage grew such that he used his power to create a cow that was supposed to die when Gautam touched it. That cow reached Gautam’s ashram. Gautam saw the cow and signalled for the cow to return, but the cow died when he touched it. The Brahamins saw this and started shouting, “Gautam has killed a cow! He must repent!” Killing a cow is considered one of the greatest sins for a Hindu, as cows are sacred in the religion. Gautam found out that this was all done by King Indra. Gautam cursed the Brahamin, “Go now! Your hunger will never be quenched. You shall remain hungry for many ages!” The Brahamins went home in dismay, and Gautam stopped serving food to them.

After this incident, Gautam continued living his life with Ahliya. Ahliya gave birth to a baby girl who was not only beautiful but strong as well. She grew up in the ashram. King Indra still didn’t give up on Ahliya. He was determined to obtain her, and all kinds of lustful thoughts were running in his mind. Bhai Gurdas Ji mentioned this state of Indra in their Vaaran (Ballads written by Bhai Gurdas Ji, known to be the key to unlocking the wisdom of Sri Guru Granth Sahib Ji),

Ahalya was wife of Gautam. But when she set eyes Indhar, the king of gods, lust overpowered her.

He entered their house, got curse of being with thousands of pudendums and repented.

The Indralok (abode of Indr) became desolate and getting ashamed of himself he hid in a pond.

On revocation of the curse when all those holes became eyes, only then he returned to his habitat.

Touching the (holy) feet of Ram she was lifted to the heavens.

Because of His benevolence He is mother-like to the devotees and being forgiver of the sinners He is called redeemer of the fallen ones.

Doing good is returned by good gestures always, but he who does good to the evil is known as virtuous.

How can I explain the greatness of that unmanifest (Lord).

Indra is Taken Over By Lust

Indra was engrossed in the lustful thoughts of Ahliya. Many wise people advised him, “It is sinful to have a physical relationship with a wife of another. One suffers the worst of hell for this. One should not even imagine being with another’s wife. You have many wives of your own. Do not deceive them.” On the other hand, one of the cunning ministers advised Indra, “Gautam goes to the river during morning prayers. During this time, one should not indulge in sexual behavior. One sings the praises of God during this time. It will be good to ask help from the rooster and the moon.” “What kind of help?” Indra asked hastily. “From the call of the rooster, Gautam wakes up, and when the moon comes out, he goes to the Ganges river to take a bath. If the rooster call and the moon rising happen simultaneously, Gautam would wake up and go to the river. This will be a good time for you,” the minister said. “This is a great idea! I will seek help from the rooster and the moon now. I shall speak to them. They will surely help me,” Indra said.

Indra told everything to them, and they agreed to help him. In the middle of the night, the rooster began to call, and the moon came out. Gautam got up and went towards the river. It was not the time to take a bath in the river, but he still went. While bathing, the river spoke to him, “Hey Gautam, you have come so early to take a bath while there is a thief in your house. You have been cheated. Go home and check if everything is alright. This doesn’t seem right.” While Gautam was gone, King Indra took the form of a cat and went to Gautam’s house. He took the form of a cat because Gautam had little trust in Ahliya. Many deities were after her, so whenever he used to go to the river he would ask his daughter, Anjani, to sit in front of the house door.

When King Indra came, he saw Anjani at the front door. He turned into a cat and went inside the house. Anjani didn’t pay any heed to the cat. Upon entering, Indra transformed himself into Gautam. Ahliya did not know that it was actually Indra, and he started making love to her. When Gautam came home, he asked Anjani, “Who is inside?” Gautam was angry, and he was feeling uneasy. “Majaar!” Anjani said. Majaar has two meanings; one means mother’s lover, and the other a cat. Gautam went inside and saw Indra, looking like Gautam, lying down naked next to Ahliya.

Gautam was enraged, he remembered Saligram and cursed Indra, “Indra, you have sinned for momentary pleasure. Your body shall be covered with thousands of vulvae! You shall suffer and pay for your sins!” Indra became afraid, his body started changing and vulvae started to appear. With shame, he began to hide his body. Gautam then cursed the moon, “You were religious. You gave light to the world. You helped this sinner; therefore, you shall not be a full moon all the time. You shall go through waning and waxing, and you shall be a full moon only once a month!’” Gautam looked at the rooster and cursed it, “In Kaljug (the dark age), you shall make your call late in the morning, and no one will trust you!”

Once he had cursed everyone, now he looked at Ahliya. He cursed her, “Ahliya, you were a faithful wife. But now, you have lost your intellect. You couldn’t differentiate between your husband and another man. You just lied there like a stone. Go, you shall take the form of a stone and shall never be liberated. In Kaljug, womanhood will be weak.” When Ahliya heard this, she pleaded with folded hands, “Oh husband, this is not my fault. He took your form, and I only saw you. I was cheated. I am faithful to you.” Gautam then said, “You will be a stone only until Sri Ram Chandar (Incarnation of Treta Jug) takes birth in this world. When his feet touch you, you will transform back into a woman and will be liberated.

Ahliya left the ashram and went to the river bank. She transformed into a stone. For many ages she was a stone, until one day, Raam Chandar Ji came to the river bank and stepped on her. She was liberated.

King Indra came back to Gautam to seek forgiveness and pleaded that he take the curse away from him. He promised never to look at another woman. Gautam then forgave him.

Anjani was cursed to be a mother while being a virgin. She gave birth to Hanuman.

This was the story of Gautam Rishi and Ahliya.