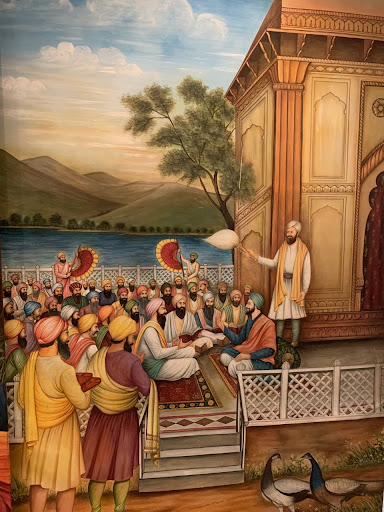 One day, Guru Gobind Singh Ji went hunting. He took the Singhs far away to pursue a lion, and the Rajput Princes witnessed this. There was a celebration in Rewal Town, and the Rajputs asked, “Guru Sahib, please do come with us; there will be other princes there and Sikhs too.” Guru Sahib knew that this was a trick and the Rajput were deceitful, but Guru Sahib remained quiet and agreed.

At this time, Madan Singh Chamar spoke,  “One reaps what one sows; no one can even move one hair of Guru Sahib. If one does Seva with love and devotion, one will be free from the cycle of life and death. One who slanders and makes false accusations will stay in the cycle of life and death.” The Sikhs asked, “What is he saying?” Madan Singh smiled and kept quiet at this time. Guru Sahib said, “O' Sikhs, Madan Singh has done Seva of the horses for 12 months. If a Sikh does selfless service of the Guru's horses and cows for one year, that Sikh will reach a status where no one else can reach.” Apart from those who do Simran, no one can reach this state.

The State of Continuous Simran

When a devotee reaches that state of continuous Simran, it will first remove the Abhiyasi (practitioner of meditation) from their Asthool Saroop (physical/visible form). The soul will then pass through the Sookhsham Sareer (Non-physical/invisible body) and the Kaaran Sareer (causal body) in such a flight that the soul reaches the Sahans dal Kanwal (astral plane). This is where there is the brightness of thousands of suns, just as Gurbani states,

Chanting the Naam, the Name of the Lord, the light of millions of suns shines forth, and the darkness of doubt is dispelled. ||1||

Before this, we would hear the words of Gurbani, but now we are experiencing them. If the practitioner does not get caught and beaten up in the Maya (illusion), does not indulge in the four Kurehat (cardinal sins), does not let pride take over, and has love and faith for the True Guru, then one day the blessings of Satguru Ji will take them into the Trikutti (Third Eye). After some time, the intense love will take them into their Dasam Duaar (Tenth Gate),

When the key is inserted to unlock the Tenth Gate,

Then the Blessed Vision of the Merciful Lord is obtained. ||24||

These experiences start with the practice of Simran (remembrance of Vaheguru). The greatness of Simran is described in the first stanza of Sukhmani Sahib (Prayer of Peace). The likes of Bhagat Kabir Ji and Bhagat Ravidaas Ji wrote their bani when they reached this state.

Those who read and preach the Vedas (Hindu Scriptures) have not reached this state as Vedas only speak about the Trey Gun - Rajo, Tamo, and Sato (three qualities of Maya). This state is beyond these three qualities. Sri Krishan Ji told Arjuna, “Hey Arjuna. You cannot experience me until you have risen above the Trey Gun. The Trey Gun binds the whole world, and all tasks/affairs are done within the Trey Gun.”

Rajo Gun - The cause of attachment, ego, etc. (Action)

Tamo Gun - The cause of laziness, sleepiness, etc. (Inertia)

Sat Sangat (True Congregation), Naam Abhiyaas (Practice of Naam Simran), and Rehit Maryada (Sikh Code of Conduct) can release someone from the Trey Gun. This is where the religious pursuit starts when one reaches the Chautha Avastha/Pad (fourth stage of devotion)

The Tenth Guru told Bhai Madan Singh, “Continue doing your Seva of the horses, whatever blessings you have, keep them secret. This is the house of Satguru Nanak, and They are our Protector. So do not worry, go along with whatever is happening.'

Guru Sahib and the Rajput Princes went to Rewal. There were many other princes and Sikh Sangat there. Everyone did ishnaan (took a bath) in the sarovar (pool of water), did Naam Simran (remembered Vaheguru), and gave charity. Guru Gobind Singh Ji sat upon higher ground.

The princess of Chamba was unmarried. With the permission of her father, she wrote a letter to Guru Sahib. The princess was very well versed in poetry and its skills, and she loved reading Bani of the Gurus. She had the desire to have the blessed vision of Guru Gobind Singh Ji. With utmost respect, she wrote a poem depicting the greatness of the Guru and asked five questions,

Guru Sahib read this letter and knew it was written with so much love. They immediately wrote an answer.

Answer for Questions 1 and 2

First, the fundamental object that a human obtains when coming to this world is this body. The second is Dubda (doubt) and the influence of Maya (illusion) that separate us from Akaal Purakh (Timeless Being)

Those dealers who abandon their Lord and Master and attach themselves to another, are drowned.

The True Guru is the boat, but few are those who realize this.

Granting His Grace, He carries them across. ||13||

Haumai (ego) is the greatest suffering to humans, which subjects them to the cycle of life and death along with countless life forms.

We are now reaping the karma of our past lives. Without the wealth of Naam, our Sanchit Karma (sum of all our past lives karma) cannot be burnt. Gurbani tells us,

By the actions we have committed, we are separated from You. Please show Your Mercy, and unite us with Yourself, Lord.

The karma of past actions cannot be erased, O wife of my house; this is why I chant the Name of the Lord.

If death comes, but the account of karma is not cleared, then according to that karma, Dharamraj (Judge of Righteousness) will judge you, and you shall return into the cycle of life and death.

One who has a karmic debt to pay off is summoned, and the Messenger of Death smashes his head.

When his account is called for, it has to be given. After it is reviewed, payment is demanded.

This was the reply sent by Guru Gobind Singh Ji to the princess. Upon reading this, the princess took her father's permission and went to see Guru Sahib. She bowed down to Guru Sahib, but Satguru Ji turned their back towards her. She asked, “Why have you not placed your hand on my head and blessed me?”

Guru Gobind Singh Ji replied, “A Sikh will not touch a Turkani (Muslim woman), and I will not as well. Dear daughter, your service and devotion have been accepted. You will take birth at Damdama Sahib, in the family of Dalla, you will do Seva of the Sikhs, then I shall come and give you my Darshan (blessed vision).”

She replied, 'Bless me, Guruji,' and left. She spent her life following Gurmat.