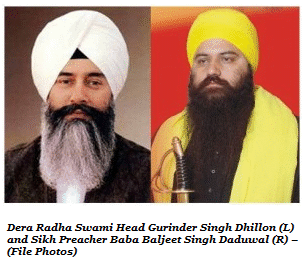 ii) Sargun: Guru Ji says that Sikh is my Sargun form. Sargun means with qualities, i.e. physical. They say that the Khalsa is my special form, I reside within Khalsa. The Panj Piaare (five beloved ones) are the Khalsa Panth.

iii) Nirgun: Guru Ji says that my Nirgun (transcendental) Saroop (form) is the light inside every single person. What is this light? It's God. So, Guru is saying that my third form is God.

Key Difference between Radhasoamis and Sikhs

Anyone who thinks that Guru Nanak Dev ji is not here today, ceases to believe in Gurbani. They think Guru Sahib is gone. Guru Ji says they live in Amarpuri (forever region). When you take Amrit and become a part of people who are immortal, then you don't die. The body dies, but the soul lives on forever. So all the Gurus are still here and have not gone anywhere.The Mahapurakhs (saints), enlightened beings have met Guru Sahib. They've had Darshan (vision) of Guru Sahib. We can do Ardass (humble request) to Guru Nanak Dev ji even now and we start off the Ardas by naming all the ten Gurus because they are still here.

You climb a mountain and you get two ropes. One rope comes from above, the other rope is lying on the ground. You can start climbing the mountain with a rope from the bottom, and keep flipping it on as you go up. At some point there is a risk, you might run out of rope because you don't know how long that rope is. The path is very high and this rope might not reach there. You don't know who that Guru is. But you do know that the other rope came from above. There is a guarantee with that rope that it's going back there, because it has come from there. So, that is the Guru and the Gurbani. It has come from there and it is going to go back there, guaranteed. That is why Guru Ji says, hold onto Gurbani, hold on to Guru Nanak Dev Ji. Radhasoamis still read Gurbani, but they need a physical Guru. They don't accept the Granth and the Panth. So, they miss out on Gurparsaad (Guru’s grace).

We are all diseased with Houmai (ego). We need a doctor to prescribe us medicine in order for us to get cured of Houmai. Life with no restrictions is easy. It's easier than taking Amrit and doing the Panj Bania. So people take it up because it's a simple way. But they don't understand that we all need Guru Ji to cure our Houmai (ego). In the following quote Guru Ji says,

My physician is the Guru, the Lord of the Universe.

He places the medicine of the Naam into my mouth, and cuts away the noose of Death. ||1||Pause||

My Guru is my doctor. He gives me the medication of Naam and frees me from the life-death cycle. The Guru that tells you this way is hard, and you might not even make it, you have to work hard for this. He might be the true Guru. He might be the one that is giving you the right prescription. A doctor who tries to dilute the prescription is not trustworthy. The one that makes it easy and says, come once a week to see me and give me 10% of your income might not be the right doctor. He just wants you as his patient.

People follow these Physical Gurus because the Sargun (physical) form of the Guru is not standing up and following Sikhi properly. They know the problems in the Panth but they're not taking action. At the moment, Sikhs are not really worthy of the name Khalsa. They are scared of doing what they meant to do. Khalsa does not live the way it is supposed to live nowadays. Hence, people have lost their trust in Panth. It's our fault that there are Dehdhari (physical) Gurus nowadays. We need to stand up as the Khalsa. The world will follow the Khalsa because it is made to fight against Adharam (unrighteousness). Nowadays, we're busy from 9am to 4pm at work, stuck in Kaam (desire), Krodh (anger), Lobh (lust) Moh (attachment), Ahnkaar (ego). We have lost vision of what we are meant to do. That's why these Dehdhari (physical) Gurus are here nowadays.