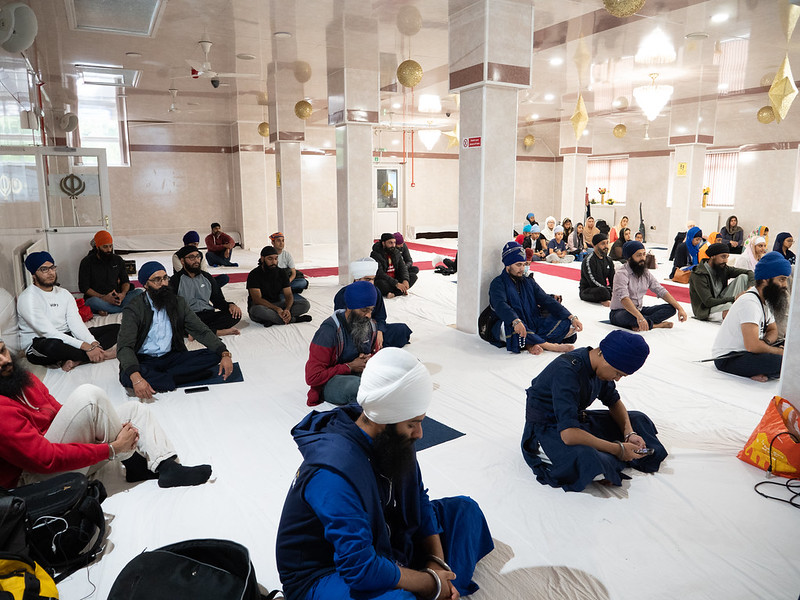 He says that the word Vaheguru is the Gurmantar. By doing Naam Japna (chant) or Naam Simran (remember) of this Gurmantar, you will lose your Haumai (ego). Haumai (ego) is the biggest illness inside us that keeps us separate from Vaheguru/Creator. The point of Sikhi is to get you away from the sense of separateness from the divine.

Does Gurbani speak of  Chanting?

An easy way to understand the chanting of Gurmantar is through the following Gurbani quote from Sukhmani Sahib. It states to chant upon Vaheguru again and again and again.

Time after time, again and again, meditate on God. Drinking in this Nectar, this mind and body are  satisfied.

Chanting Vaheguru is meant to create a mystical experience. To understand Naam Simran, imagine, we're basically on one side of a wall where we are within the illusion. The creator is on the other side of the wall that is the ultimate reality. Guru Sahib is saying to poke a hole in that wall and make it bigger. Naam Simran and the connection with the divine are designed to make you do that. Gurbani says that the mind is filthy and it needs to be washed. The following Gurbani quote from Sukhmani Sahib states that by doing Simran of Vaheguru, the dirt of our mind gets washed away and the immortal name resides in the heart.

In the remembrance of God, the filth of the mind is removed. The Ambrosial Naam, the Name of the Lord, is absorbed into the heart.

This experience is indescribable. It is a bit strange because I am doing so now. Having that mystical experience is intrinsically linked to your Dasam Duaar (tenth door). Dasam Duaar is located on top of the head. Simplistically, it could be called a door into your body. There are a total of ten doors in the body - two eyes, two nostrils, two ears, one mouth, rectum, reproductive organ, and the tenth being the Dasam Duaar (pineal gland on top of your head). In other faiths, they have different names for this specific spot. In Buddhism, it is called the flowering spot of the thousand petal lotus. In yoga, it is called the seventh chakra.

Some of the different methods of doing Naam Simran

Now we will discuss five different ways of doing Naam Simran. Any one of these could work for you and there is no specific one right way.

We're in Kal jug right now, which is the worst age to be in since it is the age of darkness. Guru Sahib described this situation where you've got a table with four legs. When it's got four legs, it is very stable and it is Sat jug, the age of truth where everybody is enlightened. Then the legs start breaking off and you've got Treta with three legs. It is a bit unstable. Then comes Duapur which has two legs and now is Kal jug which only has one leg.

Some Gurdwaras have Naam Simran programs usually early in the morning. Most people go through each one of these methods at different times throughout the program. Sometimes they might go into Vahe-Guru Vahe-Guru Vahe-Guru which is the fourth one, breath meditation. And other times people might do it very slowly and therefore saying Va-he Gu-ru.

Kabeer, repeating, ""You, You"", I have become like You. Nothing of me remains in myself.

There's no one right way of saying Vaheguru. The key thing is that we connect to our creator and we actually try to become one with the creator. As our Gurus tell us that we need loving Worship, Mind and Senses involved and Grace of Vaheguru to experience the Naam.

People have different opinions of what Naam is but we also know that Naam is extremely important to us. Naam can loosely be translated as the divine connection. Sat Naam is the second word that comes into Guru Granth Sahib Ji.  If we look at the end of Jap Ji Sahib, the following quote says those people who have concentrated and earned this Naam, they've actually achieved something and their faces are bright when they go from this earth.

Those who have meditated on the Naam, the Name of the Lord, and departed after having worked by the sweat of their brows, O Nanak, their faces are radiant in the Court of the Lord, and many are saved along with them! ||1|||

Also, right at the end of Sri Guru Granth Sahib ji, where Guru Ji is putting Mondavni, which is a royal seal and the following quote of Mondavi says

Upon this Plate, three things have been placed: Truth, Contentment and Contemplation.The Ambrosial Nectar of the Naam, the Name of our Lord and Master, has been placed upon it as well; it is the Support of all.

This tray has three things, Truth, Contentment and Contemplation. And the Amrit Naam of the creator is holding it all together. Then last bit says

It says that only if I have this Naam, then I live and my whole mind and body blossoms. Just like the barren earth becomes green and it looks beautiful compared to how it was before. Naam is like water which is life-giving to us. In Rehras Sahib, Guru ji says

when I remember you, that's when I'm alive; when I forget you, I'm dead. So connecting to the One Vaheguru is the real cake of Sikhi. Then the icing on the cake might be the Roop and the Rehit. They're designed to help you to get a really lovely cake. We have our "Saant Sipahi" ideal. As Sikhs, we're trying to save the world, stand up for justice and freedom. It's very hard to do all these things if your inside is not strong. You are facing Guru Ji and that's what effectively a Gurmukh is. A Gurmukh is an ardent Sikh who has his face towards his Guru and he's not facing towards the world.

There is a positive experience of doing Naam Simran, the love and you merging with the One but there is another way of looking at it. In Asa Di Vaar, it says

Your Name is the Fearless Lord; chanting Your Name, one does not have to go to hell.

The Naam is formless and indescribable. By saying this Naam, we won't go to hell. If you don't do Naam Simran, you've wasted this jewel of human life. Guru Teg Bahadur ji says in Salok Mahala 9,

Your mind is trapped in Maya and forgot the name of Vaheguru. If you are not singing the praises of the One, then what's the point of life?

Different Ways of Connecting with Naam

There are many ways of connecting to the One in Sikhi and some are as follows:

Within that, you also have to build your character and fight off against the five enemies that will steal all of your earnings. These five enemies are Kaam (lust), Krodh (anger), Lobh (greed), Moh (attachment), Ahankaar (pride) and reside inside everyone. They are going to rob you

while you're awake and you're still looking around. You get rid of these five to build up your character.

If you haven't chanted Vaheguru or experienced Naam, we'd recommend it. The best advice that I got was to do Ardaas for Guru Ji’s help. Try chanting in each of the above-described ways and go with what feels right. Find Sadh Sangat (holy company) to help you grow.