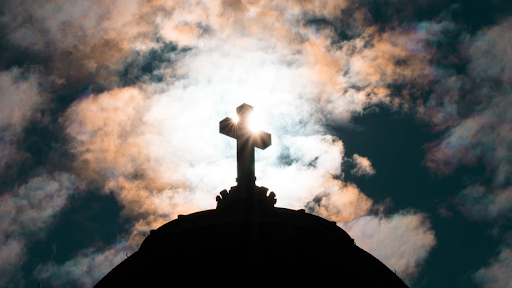 any Christians say that Jesus Christ died on a cross for the sins of all of humanity. It makes sense from a Christian perspective, but what does Sikhi say about this? In this article, we will analyze this question deeper and understand it from a Sikh viewpoint.

DISCLAIMER: The intent of this blog post is not to denigrate Christianity in any way. Our purpose is to educate the Sikhs about this aspect of Christianity, where it is coming from and offer a Sikh perspective.

When a Christian says that Christ died on a Cross for our sins, there are two aspects behind it. The first aspect is, forgiveness of sins. From a Sikh perspective, we believe that Christ can forgive sins because we believe that God and the Guru can forgive sins. We believe that saints of high spiritual level have this ability. In the following Gurbani quote, Guru Nanak Dev Ji says that when a person in Karam Khand (Fourth Stage) says something, it will come true. If such a saint says, “I forgive your sins”, then God makes that Bachan (Command/Speech) come true.

There is spiritual force in the language of the person in the realm of Karam (Grace).

To learn more about the spiritual stages (Panj Khand), check out the 5 Khands of JapJi Sahib

This concept comes up in Gurbani where Guru Maharaj Ji says,

When Saints at such a level say something, then it becomes true here and in the next world. In Sikhi, we understand that the Guru forgives all of our sins. When we receive Amrit (Nectar of Immortality), we are told that from now on all your Paap (Sins) have been wiped out. It does not mean that you have lost all your bad habits. It simply means that your Lekha (Spiritual Account) has been wiped clean. Maharaj Ji says,

Please ignore my account; only then may I be saved. I am meritless- please, save me! ||1||

This means the Lekha can get wiped out, thus Sikhs accept this first part about Christ forgiving sins.

The other aspect of this is the idea that Christ died on the Cross. We understand the concept that Christ died on the cross. The Sikh Gurus went through terrible torture, Guru Arjan Dev Ji sat on a Tati (Burning Hot) Tavi (Iron Plate) and were tortured from the heat. Their skin burned off and they succumbed to the injuries. Guru Tegh Bahadur Sahib Ji was beheaded in Delhi. The Chote Sahibzaade (Younger sons of Guru Gobind Singh Ji) along with many other Sikhs including Bhai Mani Singh Ji, Bhai Taru Singh Ji and Baba Deep Singh Ji also gave Shaheedi. The concept of sacrificing yourself for the Sikh faith by giving Shaheedi is a key part of Sikh history. Thus, Sikhs understand the concept of sacrifice.

Why Did Christ Have to Die to Forgive Our Sins?

The key thing here is that Christ died on the Cross in order to forgive our sins. The question is, why did Christ have to die in order to forgive our sins? To understand this from a Christian perspective effectively, we have to look at the idea of blood sacrifice. This is the idea that somebody's blood has to be atoned for other people's sins. This comes from the idea that you have to give something in order to get something. Therefore, the blood of Christ is actually the price that he paid to forgive everybody's sins. Christ was already out there, forgiving people of their sins. When he met someone who repented, he would say, "I forgive you of your sins." At this time, he did not make a sacrifice to forgive people of their sins. Now, the concept has come into Christianity that Christ had to sacrifice himself and shed his own blood to even out a weighing scale of a sort. On this scale, you have Christ giving his life on one side and everybody else's sins on the other.

According to this, Christ giving his life is greater than everybody else's sins. One could say, this concept of sacrifice is very pagan. If you look at many cultures of the past, this idea of Bali (Sacrifice) exists, where you kill a buffalo or goat and sacrifice it. Sikhs do not agree with the concept of Bali. When the Sikh Gurus gave Shaheedi, it was not to forgive our sins, but rather to inspire us. They gave Shaheedi to inspire and teach us that one day we may have to become strong, and our faith might be tested, but through this we must stick with it, carry through and rise above the Dukh (Pain). Maharaj says,

That one, who in the midst of pain, does not feel pain,

This is the idea of going beyond the pain and happiness of a normal life and into a God-oriented life.

Why Does God Need Blood to Forgive Sins?

Pilgrimages, austere discipline, compassion and charity, these by themselves, bring only an iota of merit.

Whoever heartily hears, believes and loves God's Name, obtains salvation by thoroughly bathing in the shrine within himself.

In Japji Sahib (quoted above), Guru Nanak Dev Ji explains that those people that go to holy places to do Tap (Penance) or give Daan (Gift/Donation), only receive a sesame seed’s worth of honour. Here we can understand that Christ giving his blood and sacrifice is a form of Tap and Daan. The next Pangti (Line) explains that God wants us to go inside of ourselves and wash our insides using the Naam. In the Shabad (Hymns) quoted below Guru Ji say,

that the ultimate pilgrimage, the ultimate washing of our sins, happens through contemplation of the Shabad. Through this, the wisdom and the experience of God come inside us. The Guru Ji says,

The world is sick, and the Naam is the medicine to cure it; without the True Lord, the filth of sin sticks to it.

The whole world is Rogi (Diseased). They say, Naam is the medicine and without the medicine of Naam (God’s Name), we are all living in dirt. Naam is the thing that washes off our sins. Then Guru Ji says,

The Guru's Word is immaculate and pure; it radiates a steady Light. Constantly bathe in such a true shrine of pilgrimage. ||1||

Daily wash yourself in the Guru's Shabad (Hymns), for a Sikh this is what forgives our sins. We do not need to give blood for God to forgive our sins. As far as Sikhi is concerned, we simply need to ask for forgiveness to get our sins forgiven. This happens through chanting God's Name and experiencing God.

In summary, we accept that

A. Christ sacrificed himself and he was a martyr.

B. Christ, a saint of that level, can forgive your sins.

Sikhs do not believe that Christ would have to sacrifice himself to forgive our sins, because that is not essential for the forgiveness of sins. Forgiveness of sins, for each one of us, has to be a personal journey. A Sikh perspective of why we think this was adopted into Christian views is because of the idea of guilt. Sikhs do not believe that we are born in sin, but the idea that we are perpetually in sin is something many Christians believe. Added to that now is this perspective that Christ died for us, which proposes the idea that we have to be guilty and pay back that price by being a good person. The purpose of this blog post is not to say that one should not be a good person, or that one should not take inspiration from Christ becoming Shaheed (Martyr). The main point is that Sikhs do not agree that the only way our sins will be forgiven is by Christ sacrificing himself. We would say the only way we can be forgiven for our sins is to connect with God ourselves, and bathe in that true place of pilgrimage which is inside us.

From the Sikh perspective, it would be your own actions and how much you connect to God and Naam which outweighs all your sins. The Naam is so powerful that it will forgive your sins. Sikhs must go inside and try to wash their sins at that true place of pilgrimage, God's Name inside ourselves. This article is a transcribed version of the video

You can help spread the message of Sikhi to people around you by using the leaflet created by the Basics of Sikhi team.
Download
‍You can also check out our other leaflets on the Downloads page.
Posted
in
Politics/Debates
category

Is Sikhi a Man-made Religion?