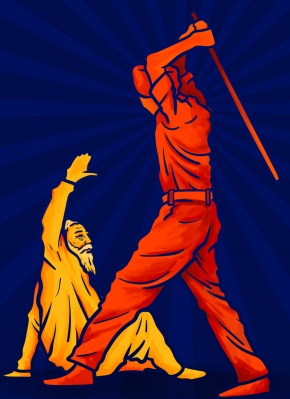 illions of farmers across India are protesting against three new farming laws forced on them by the government. This article briefly discusses how these laws impact farmers and how the Indian government is treating protestors.

The protests are being led by farmer representative groups from Punjab, as well as other states such as Bihar, Haryana, Rajasthan, Maharashtra and beyond. The movement has support from across India. On 26 November 2020, a nationwide general strike that involved approximately 250 million people took place in support of the farmer unions. The introduction of the three laws has generated a lot of anger across India, as the laws will:

These laws were ratified in September with no prior consultation with farmers’ unions or within the government. After Modi’s regime dismissed appeals by farmers’ representative groups for the bills to be revoked, a protest march to Delhi began in late November. There is currently a stand-off as hundreds of thousands of farmers, farm labourers and their families occupy the border of Delhi, stating they will not leave until the government revokes the bills. The situation facing farmers in India has been dire for a long time. In Punjab alone, 16,606 farmers committed suicide between 2000-2015. 94% of the suicides were due to debt. The rate of cancer in Punjab has also rocketed in recent years, and this is thought to be linked to the high usage of chemical pesticides mandated for use by farmers by Punjab’s government. In 2018, Punjab banned 20 pesticides that were categorized as harmful by the World Health Organization.

How is India Reacting to the Peaceful Protesters?

The Indian state has used violence against the protesters, authorizing the use of barricades, tear gas and water cannons, as well as condoning the use of violent force, as elderly farmers have been pictured receiving lashes from policemen with batons.

In addition, the Indian state has also used the media as a tool to delegitimize the protests, by labelling protesters as anti-India, separatists' & Khalistani in an effort to demonize possible solutions to the oppression, and to deflect from the government’s oppressive measures. Even India’s own press watchdog, the Even Editor’s Guild of India, distributed a media advisory stating that “certain sections of the media have been labelling [protesters] as Khalistanis, anti-nationals and other such terms to delegitimize the protests without any evidence or proof... Such actions compromise the credibility of the media.”

What Can You Do to Help?

Sikh diaspora across the world have arranged peaceful protests in support of the farmers. They have held rallies in which thousands have taken to the streets in London (UK), California (USA), Toronto (Canada), Sydney (Australia), Berlin (Germany), and beyond to show solidarity with the protesters in India. These rallies have brought people together in opposition to the Indian regime and helped raise awareness to the wider community of an issue that has far-reaching implications.

Social media users have been encouraged to share posts relating to the protests, using hashtags such as #FarmersProtest. The efforts of the diaspora have led to protests trending on social media. The #Sikh hashtag being taken down from Instagram, and this was suspected by many users to be caused by the Indian government. Furthermore, people around the world are being encouraged to write to their local and national political representatives to call out the police brutality and the oppressive laws, to make it clear to the Indian regime that the world is watching and will not tolerate the violent and opportunist mistreatment of its people.

You can help spread the message of Sikhi to people around you by using the leaflet created by the Basics of Sikhi team.
Download
‍You can also check out our other leaflets on the Downloads page.
Posted
in
Politics/Debates
category